Henry Selick masterfully handcrafts nightmares. The Academy Award-nominated animator has brought to life savage realms in James and the Giant Peach, The Nightmare Before Christmas, and Coraline. With stop-motion animation, his fingers have crafted carefully constructed characters, grounded physicalities, and daring designs that refute the dedicatedly cutesy aesthetic of their computer-animated peers. With his latest, Wendell & Wild, he plunges audiences into open graves, ravenous rivers, and the very depths of hell to spin a new tale of family trauma, guilt, healing, and demons. Best of all, those titular demons are voiced by comedy duo Keegan-Michael Key and Jordan Peele, with the latter sharing co-writing and producing credits.

A living legend of awe-striking animation. A double act acclaimed for their comedy brilliance. Two visionary filmmakers who’ve made their mark on modern horror. Its peculiar pedigree was enough for us to single it out as a must-see ahead of its World Premiere at the 2022 Toronto International Film Festival. The trailer was promising, but in execution, Wendell & Wild is a dazzling and dark treasure.

Adapted from an unpublished book that Selick wrote with horror author Clay McLeod Chapman, Wendell & Wild plays to Selick’s soft spots with its core narrative about a misfit kid going on a dangerous quest in a willful attempt to reclaim lost happiness. Here, rather than an larger-than-life peach populated by talking insects or a tiny hidden door that opens into a realm ruled by a button-eyed Other Mother, 13-year-old orphan Kat Elliot (Lyric Ross) employs a sinister teddy bear to commune with a pair of dopey demons who claim they can reunite her with her long-dead parents.

Hardened by five years in foster care and juvenile detention, Kat is suspicious of everyone around her, be it the sensitive trans classmate (Sam Zelaya) who offers her aid, the mysterious nun (Angela Bassett) who seems to know a lot about devil’s marks, or a chipper trio of popular girls who dream of transforming this tough girl into their perky protege. When Wendell (Key) and Wild (Peele) come bumbling into Kat’s dreams with a promise that seems too good to be true, of course she’s a bit dubious — but she’s also a lonely, angry teen, abandoned to a child welfare system that doesn’t know what to do with her. All she wants is her parents back, and she doesn’t have anything to lose.

A kid making a deal with a demon or two sounds like the start of a truly harrowing horror movie. Luckily, these little devils aren’t seeking Kat’s ruin; they just want to build the “bemusement park” of their dreams. So, whether it takes double crosses, creepy corpse makeovers, or raising the dead to do it, they are game. Along the way, the Key & Peele stars bounce kinetically off each other’s vocal performances, bringing a mirthful mayhem to these bad brothers. Then, Selick’s animation adds a thick layer of slime, a spattering of ticks, and band of zombie allies to the freaky fun.

Wendell & Wild has an edge of teen angst. 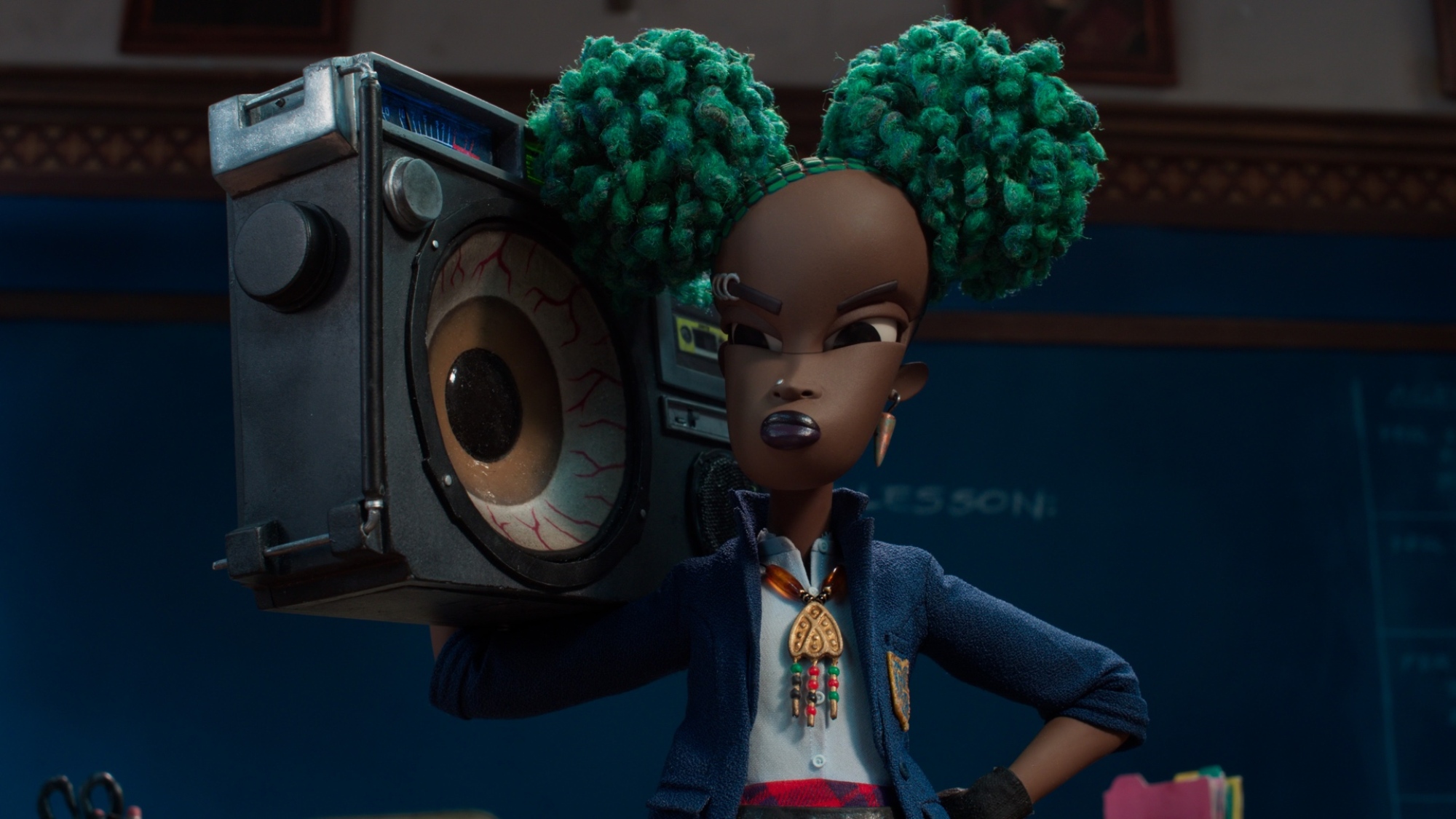 At the film’s center, Lyric Ross gives a snarling performance that brings to vivid life the pain Kat has suffered. Haunted by her past, she puts on a gruff front to keep others away, because her broken heart cannot endure any more grief. Selick illustrates her alienation with a goth-punk aesthetic that includes facial piercings, green hair, and a Catholic School uniform pierced with safety pins, then paired with fishnets and glossy black platform boots. At any moment, Kat could strut into an Evanescence or Avril Lavigne music video and fit right in; among the peppy preps and gremlin-like nuns, she stands out like a sore middle finger.

Selick’s animation illustrates her inner hurt through shadow-puppet-like montages where bullies and foster parents are black silhouettes with glowing green eyes. The movie’s soundtrack sings of her angst with wailing rock songs. Even her brief voiceover speaks to her isolation, asserting how her pain is more profound than others. “Everyone’s got demons,” Kat says, “but my demons have got names.”

The Common Denominators of Sustainability in Healthcare: Measurement and Transparency

And yet her demons aren’t the biggest threat she faces. 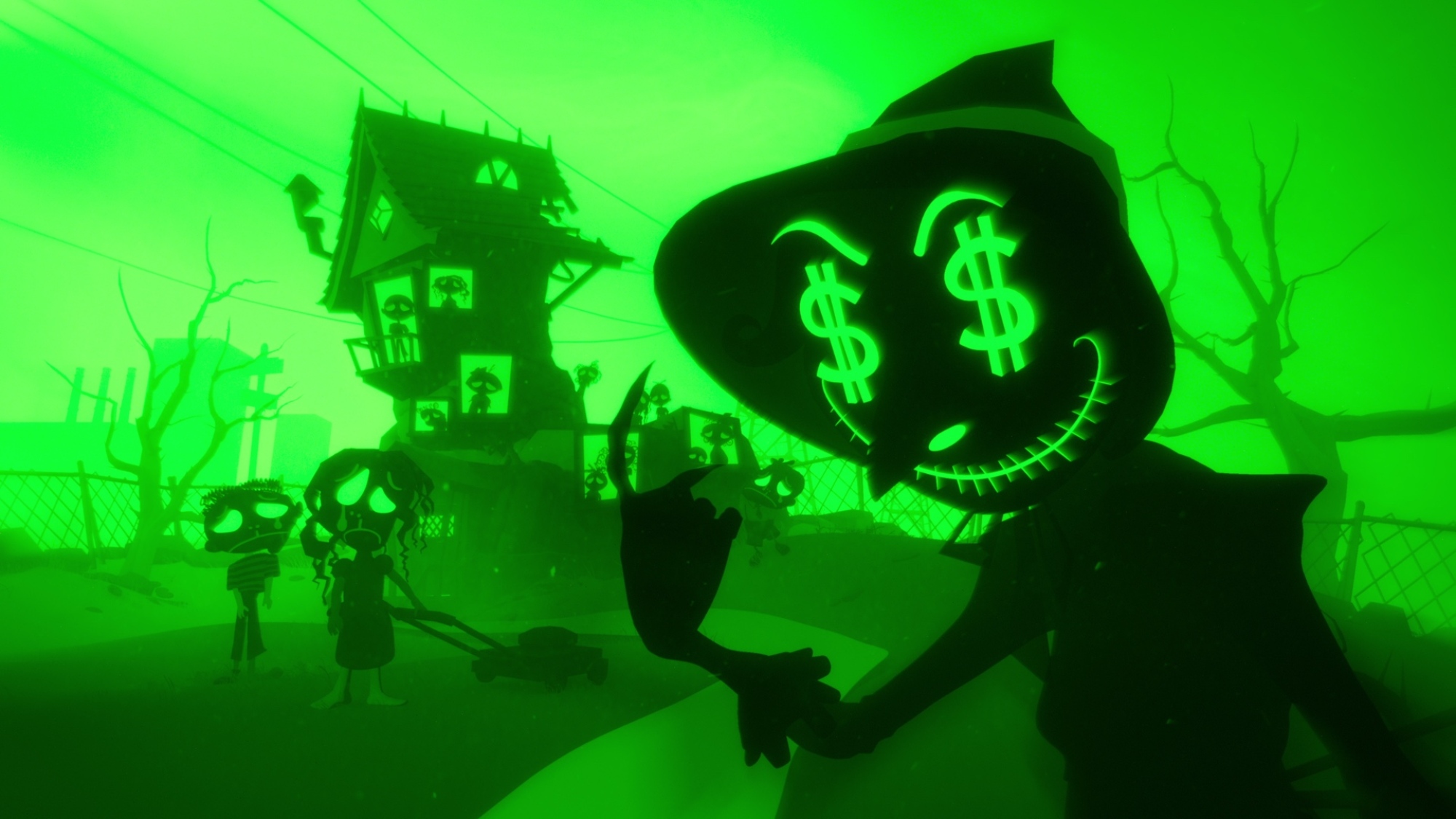 Among her losses, Kat has seen her hometown slowly rot. A once-bopping family business has been burned to the ground. Houses sit empty and blighted. The town once aglow with lights and color is turning dark and gray. This is just what a pair of rich real estate developers want, as they plan to turn the dying town into a private prison for profit. And they’ll do whatever it takes to make that blood money, even if it means making deals with demons.

While the plotline gets a bit wobbly, grade-schoolers will be able to follow the broad strokes. And grown-ups might appreciate how Selick creates parallels in what it means to be a prisoner, what it means to be in control, and what is necessary to topple a system only meant to keep the 99% down. A climactic action sequence is not only thrilling for the inventive team-ups and peculiar power moves but also because it spins this fantasy into defiant political terrain. You might even notice how one of the mercilessly self-centered real estate developers resembles a certain reality-TV star turned politician.

However, politics, like religious iconography of nuns, crosses, and demons, are used in service of telling an overarching story about the power of community and family, bonds that cross differences and bloodlines. In the end, after all its darkness, death, and drama, Wendell & Wild is about how by coming together we can rebuild, heal, and move on to a better tomorrow.

All in all, Wendell & Wild is a heady trip through a spooky and suspenseful terrain, dotted with big emotions and big ideas. Some are more smoothly woven in than others, but all contribute to a tapestry that is boldly macabre, earnestly heartfelt, and visually astonishing. Selick’s handcrafted stop-motion has long been gorgeous in its strangeness and scares. Here, he continues to push the envelope on the medium, on what topics can be explored in a kid’s movie, and what he can do to dazzle us. Simply put, Wendell & Wild offers chills, laughs, lessons, and a dark but radiant heart.

Wendell & Wild was reviewed out of its World Premiere at the 2022 Toronto International Film Festival. The movie will open in select theaters on Oct. 21, then arrive on Netflix Oct. 28.

Digital weight loss company Noom confirms another round of layoffs

See Why ‘The White Lotus’ Fans Are Flipping Out After Seeing Connie Britton’s Emmys...