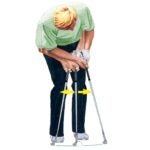 For my money, the greatest putters of the modern era are Tiger Woods, Ben Crenshaw, Brad Faxon and Jack Nicklaus. I see a lot of players try to mimic the styles of the first three but rarely Jack’s. Odd, to say the least — you don’t win 18 majors (including two at St. Andrews, host of this year’s Open Championship) without a world-class stroke.

In speaking to many students over the years, some have mentioned not being comfortable with the way Nicklaus set his head so far behind the ball at address. Fair enough — not many golfers are left-eye dominant like Jack. But what about the other aspects of his stroke? Here are three elements I think every golfer — including you — should copy.

Nicklaus played the ball off the instep of his front foot. Motion analysis studies show that a forward ball position promotes an upward angle of attack, or “rise,” of the putterhead through impact. This, combined with the absence of any shaft lean at the point of contact, creates topspin—the secret to a pure, “wobble-free” roll.

At setup, Jack hinged his wrists downward, not up. Such ulnar deviation helped Nicklaus “lock” his wrists in place, thereby eliminating unnecessary twisting of his hands or the putterhead. Thanks to launch monitors, we know that your putter produces the most “smash factor” (club speed/ball speed) than any other club in your bag. Keeping the putter stable through impact is the only way you can manage it. In fact, some instructors argue that head/face stability is more important to putting success than path or impact point.

In his many teaching manuals and videos, Nicklaus refers to his left hand as the one that controls the putterface and the right as the one that supplies the stroke power. It’s this relationship that ultimately helps you generate the correct amount of force for any putt you’ll face. Consider the roles of both hands when you practice, prioritizing, as Jack did, speed control. (Between us, aim is overrated, especially outside of five feet.) Three moves, no more three-putts. Copy that!

GOLF’s Subpar: The golfer Ian Rapoport would change lives with

Then vs. Now: How Digital Technology Has Changed Vision Care