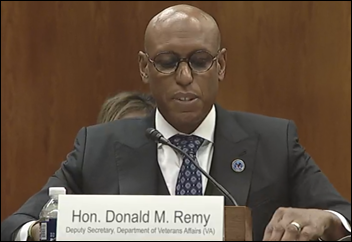 VA Deputy Secretary Donald Remy tells Congress that its Oracle Cerner system is “not even close” to meeting patient needs and that “major improvements” are needed to resolve patient safety issues, which may force planned go-lives to be pushed back.

The VA’s top contracting officer added in the Senate appropriations subcommittee hearing that the VA “shouldn’t blindly follow” DoD even though that’s why VA originally chose Cerner in a $10 billion no-bid contract. He added that the VA may renegotiate its Oracle Cerner deal when the base contract expires in May.

Sen. Jon Tester (D-MT), chairman of the Senate Committee on VA Affairs, said that the implementation has been a “train wreck.”

The VA’s Cerner project will cost $58 billion over 28 years, according to the testimony of Brian Rieksts, PhD of the Institute for Defense Analysis, which the VA asked to perform an independent life cycle cost estimate. 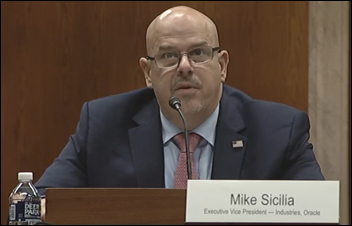 Oracle EVP Mike Sicilia told the subcommittee that Oracle Cerner will “deliver a system that will leapfrog commercial EHRs” at no extra cost to the VA. “We intend to rewrite the Millennium EHR as a stateless cloud application which will deliver a modern user interface, ease of use, mobility, voice recognition, and self service. It will have machine learning-based clinical decision support and analytics that are built in from the ground up. We intend to deliver a beta of this new system in 2023 and we commit to deliver it across VA as a cost-free upgrade under the current contract.” Sicilia says that new modules will run in parallel with existing Millennium software, allowing VA to decide when to switch to the new ones without requiring data conversion.

Asked by Sen. Tester where the VA’s project fits within Oracle’s priorities, Sicilia said, “This is the most important effort we have going on in the company. We have recast over 2,000 people, existing Oracle employees, to now work specifically on the VA EHRM program, in addition to the existing Cerner team.” He says the original 10-year timeline is still achievable.

Oracle has contracted with Accenture for training, which Sicilia admits was managed better with the DoD’s project.

Meanwhile, several members of the House Veterans’ Affairs Committee want to increase congressional oversight of the VA’s technology acquisitions, citing as examples its supply chain management system (adopted from DoD at a $2 billion cost, with OIG saying it meets less than half of VA’s needs) and Oracle Cerner, which Chairman Mark Takano (D-CA) calls “the poster child for major acquisition issues at the VA.”

From Buoyancy: “Re: Touchstone Imaging security incident. I received this letter from the company, which has $200 million in annual revenue, nine months after the incident with no explanation of what happened. They didn’t even offer free credit monitoring.” The company’s imaging centers basically shut down temporarily after the December 24, 2021 incident, with employees telling reporters that a hacker had taken down their phones, computers, and imaging systems. In older related news, Touchstone paid $3 million in 2019 to settle HHS OCR charges that a misconfigured FTP server allowed patient information to be Googled by anyone, claiming at first that no PHI was exposed until OCR’s investigation found otherwise. Touchstone was apparently acquired in late 2018 by US Radiology Services, a private equity-backed diagnostic imaging provider, although the companies refer to their connection as a “partnership.” 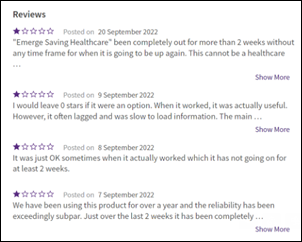 From Hatton Hand: “Re: Emerge. The data archive solution has been down for more than two weeks and I can’t access critical patient health information. The company is unresponsive.” I contacted Emerge, which provided this response:

Emerge is in discussions with a number of potential equity partners to restart operations and help the company grow to its potential. Emerge understands the concerns of its customers and the importance of getting back online as quickly as possible and is doing everything that it can to make that happen by the end of September. 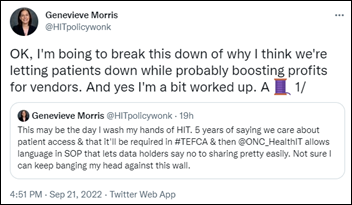 From Patient Identity: “Re: SOP for Individual Access. Wondering if anyone has reviewed this recent SOP from ONC? I’m interested in what industry folks think. Check out twitter feed for @HITpolicywonk on this topic.” The Standard Operating Procedure document describes how the identities of patients who are seeking access to their information are verified by a credential service provider. Genevieve Morris worries that subtle wording of the requirements make participation optional and may lead EHR vendors to charge CSPs to access their systems.

A New York Times piece led me to check out the YouTube series of King Crimson’s 76-year-old leader Robert Fripp, who is mostly known as a scowling, audience-indifferent, hard-to-work-with musical perfectionist. Fripp, wearing his usual vest and tie, plays guitar and rolls his eyes as his wife of 36 years – singer and actress Toyah Willcox — sings and gyrates remarkably in the couple’s kitchen to music ranging from Radiohead to Britney Spears in their video series titled “Sunday Lunch with Toyah & Robert.”

Financial analysts warn that outpatient surgery center and physician staffing operator Envision Healthcare will likely run out of cash and file bankruptcy by the end of the year.

How to know you have a spinal cord injury 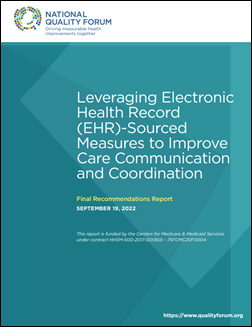 A CMS-funded study by National Quality Forum looks at using EHR-generated measures to improve care communication and coordination. A few of its ideas:

Maryland’s state legislature grants CRISP, the state-designated HIE, authority to operate as a health data utility, where it will be required to provide patient data to support public health goals. The state’s department of health, nursing homes, electronic health networks, and pharmacies will be required to send data to CRISP. 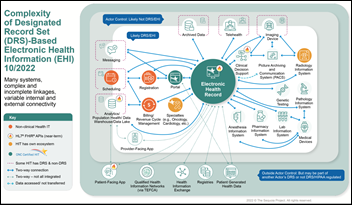 The Sequoia Project’s Information Blocking Compliance Workgroup publishes resources to help entities comply with the information blocking requirements of the 21st Century Cures Rule that go into effect on October 6.

USPTO issues a patent to Medicomp Systems for intelligent prompting of clinical protocols.

A Washington Post review finds that several popular Android health apps send information to advertisers. It notes that the identifiers that are sent don’t directly identify the user, though privacy experts warn that being targeted by an advertiser using specific health concerns or conditions is jarring.

HHS waives HIPAA sanctions and penalties in Puerto Rico, where a public health emergency has been declared following Hurricane Fiona.

An NHS trust apologizes to 1,800 patients who were removed from its six-month appointment waiting list by robotic process automation technology that wasn’t being monitored. RPA software vendor Blue Prism found a caching issue, but a significant problem was that the RPA rules hadn’t been updated with new procedures for managing various NHS wait lists because the hospital’s only RPA expert had changed jobs.

5 Reasons To Get Medicare Coverage For Your Senior Parents