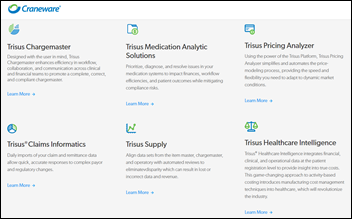 Scotland-based charge master software vendor Craneware reports that revenue for the year to the end of June was up 119%. Earnings increased 85% to $50 million.

Much of the jump was attributed to the company’s July 2021 acquisition of US-based pharmacy systems vendor Sentry Data Systems for $345 million at current exchange rates.

Craneware’s entire customer base is in the US, where 40% of all hospitals are its customers.

From Premature Oraculation: “Re: Oracle rewriting Cerner Millennium. Six to nine months, even to reach a vague beta stage as the Oracle exec says, is not doable.” Agreed. Pharmacy systems are complex, deeply interconnected, and likely to create patient harm if designed or tested poorly. Oracle has the technical expertise to rewrite Cerner pharmacy in less than a year, but they are promising a complete functional redesign of the VA’s version of it. That doesn’t sound like enough time to even convene a VA working group to represent its 171 medical centers, develop basic specifications, and create an approval and signoff structure in both organizations. Even a technical replatforming to modern architecture would be a major undertaking given the testing that would be required, and some would say it’s a missed opportunity to skip the chance to design an entirely new system. Still,  give Oracle credit for boldly placing a stake in the ground even though I suspect the company is naively underestimating the complexity of a hospital IT system, especially one that touches patient care directly and that has so many integration points to other modules. Also, whether it makes sense to develop a VA-only custom system and how that would work with customer-facing development tools such as MPages and CCL. I don’t understand why a pharmacy rewrite is important since I haven’t seen publicized VA problems that it would resolve, unless Oracle is talking the ambulatory pharmacy module, which has had some integration issues reported. It’s also true that throwing more technical bodies at a huge development project, especially one that requires endless stakeholder input, doesn’t necessarily make the project go faster or better.

Poll respondents who plan to attend conferences in the next year are most likely to be found at HIMSS23, a vendor’s user group meeting, or ViVE.

New poll to your right or here: How will Oracle’s acquisition of Cerner impact the VA’s EHR implementation? I’m leaning toward “more likely to be successful” since the project’s challenges – excluding those of the VA itself — are mostly technical and Oracle brings a lot of engineering talent to the table.

Even so, it has been jarring to see how readily Oracle has thrown Cerner under the bus, blaming its lack of technical expertise and its dated architecture after spending $28 billion to buy the company. Maybe Oracle was caught off guard by catching so much congressional heat just weeks after the Cerner keys were handed over. Meanwhile, DoD’s Cerner project hasn’t had many publicized issues or hiccups, which could mean that (a) Leidos as the prime contractor is better than Cerner at keeping federal clients happy or at least quiet; (b) members of Congress aren’t as involved in DoD project oversight or using it to grandstand for their constituents; or (c) the VA’s needs are more complex and heavier on integration with 400,000 employees, care settings ranging from hospitals to private medical practices, and the need to convert data from VistA and other legacy systems going back decades. Project resets are a tough call, as the time spent trying to achieve perfection means losing momentum and enthusiasm. Health system implementations of Cerner, Epic, or anything else are hard enough without politicians dispatching VA OIG to find problems.

I’m pondering the lack of smart edits to date entry, where the IT shame of Y2K elicited an overreaction of dumbing the computer down to accept only MMDDYYYY dates even when they will always be current or immediate future (like due date, ship date, appointment date, etc.) and it’s pretty obvious that entering “22” means “2022” and not “1922” or “2122.” It’s a contest of whether that wastes more time than clicking “accept cookies”

3 Ways Health Plans Can Improve Sleep Health for their Members –

A KHN report notes that two-thirds of hospices are now run as for-profit companies, often by private equity firms. They are paid a fixed daily rate  with little government quality oversight, encouraging them to cut spending and to seek patients who will live longer, such as those with dementia. 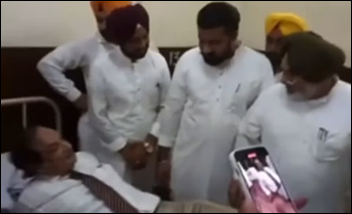 Bizarre: in Punjab, India, the health minister performs a surprise inspection of a medical college hospital, and finding a lack of cleanliness, orders the health sciences vice-chancellor to lie on a patient’s dirty bed. The 72-year-old hospital executive, who is a spinal surgeon and member of India’s medical regulatory body, resigned over the incident afterward, saying that obtaining a replacement mattress under the government’s laborious purchasing process takes nine months. Critics called the event “cheap theatrics” that will demoralize employees. I’m fascinated by the cultural dynamics that prevented the executive from refusing the demand of the health minister, a farmer who did not attend college and who has no healthcare experience.

There’s Nothing Basic About These Beginner Yoga Poses