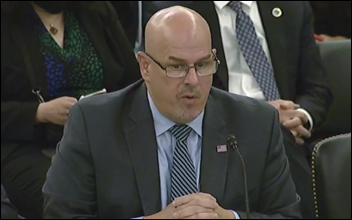 Oracle EVP Mike Sicilia tells the US Senate Committee on Veterans’ Affairs that Oracle will move the VA’s Cerner implementation to the cloud and rewrite Cerner’s pharmacy module, completing both tasks within 6-9 months. Notes: 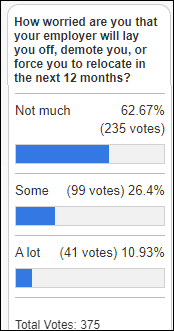 Most poll respondents aren’t too worried about negative job changes.

New poll to your right or here: Which conferences you plan to attend in person in the next 12 months? A sponsor asked if I planned to create a sponsor guide for conferences other than my usual HIMSS one, so the poll results will help me decide.

It’s an interesting phenomenon that so much of my LinkedIn feed is filled with “I’ve been laid off and need a job” posts, many of them from Olive because it laid off so many employees (450) at once. I’ve laid people off and been laid off myself and the double whammy is that not only are you out of a job, you are competing for a new position along with a bunch of your comparably skilled co-workers, most of them vastly preferring to avoid relocation. Maybe LinkedIn, combined with remote work options, will be effective in reducing the lost time between being marched out of one door (often virtually these days) and waiting for a new one to open.

Elevance Health, the former Anthem, says in its earnings call that it will develop solutions that go beyond selling health insurance, touting its Carelon health services offering in which the company’s own providers will coordinate and provide patient care. Carelon offers services for behavioral health and value-based care and operates IngenioRx, an pharmacy benefits management and home delivery pharmacy company. ELV shares are up 20% in the past 12 months versus the Dow’s 8% loss, valuing the company at $110 billion.

An Optum consumer survey finds that providers fall short in offering online scheduling for both in-person and telehealth visits, particularly for younger adults who are not satisfied. Half of the respondents missed a scheduled healthcare appointment in the past year, one-third of those because they forgot, suggesting that appointment reminders could help reduce that number.

WHO declares monkeypox as a global health emergency as world case counts rise to 16,000. US infections have risen from 200 to 3,000 in the past four weeks.

In the UK, IT and telephone system servers at one of NHS’s largest trusts go down as data center cooling systems fail to keep up with a record heat wave. The UK recorded its highest-ever temperature Tuesday of 104.5 degrees F. Clinicians are recording information by hand and asking patients to bring their own records to appointments. One doctor reports, “We are back to using paper and can’t see any existing electronic notes. We are needing to triage basic tests like blood tests and scans. There’s no access to results apart from over the phone, and of course the whole hospital is trying to use that line. Frankly, it’s a big patient safety issue and we haven’t been told how long it will take to fix. We are on divert for major specialist services such as cardiac, vascular, and ECMO.”

A widely cited 2006 research article on Alzheimer’s is found to contain what appears to be “shockingly blatant” examples of image tampering, leading to speculation that the authors may have altered data to support a hypothesis and thus sending researchers off on wild goose chases for years. In an interesting case of money driving the scientific process, the research was performed by scientists who were associated with the manufacturer of an Alzheimer’s drug, while the neuroscientist who reported the altered images was hired to do so by two other neuroscientists who were short sellers in shares of the same drug company. NIH spends $1.6 billion per year on research of amyloids for Alzheimer’s and scientists report that suggesting other causes of the condition to study pits them against the “amyloid mafia.” The only marketed drug in that category is Aduhelm, which earned the FDA widespread scientific scorn for approving a drug despite unimpressive research results. 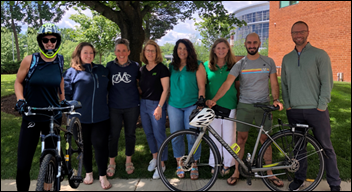