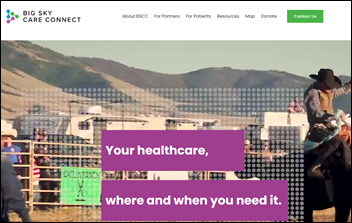 The state of Montana will invest $20 million in the Big Sky Care Connect HIE, which will fund improvements to the state-designated HIE that include a clinical data repository, ADT alerts, a quality measurement program, and image exchange capabilities.

BSCC’s members include 75 provider organizations and half of the state’s hospital systems.

From Preferred Investor: “Re: Cerner. Could stock market conditions cause Oracle to reconsider its acquisition?” I don’t know enough to comment beyond restating known facts. ORCL is paying $95 per share in cash, and of course CERN shares haven’t budged from that price in the mean time since everybody knows the eventual payoff. ORCL shares are down 23% since the deal was announced December 20 versus the S&P 500’s 15% drop. Oracle’s tender offer expires on June 6 after being extended a few times. The deal requires Cerner to pay Oracle a $950 million termination fee under certain circumstances, but I don’t know what if anything happens if Oracle reconsiders. I’ll invite experts to weigh in.

From Ballywood Man: “Re: [company name omitted]. Getting out of the North America provider market due to diminishing success, will focus on life sciences, pharma, and payers / insurers. They  ran into issues providing competitive offshore services for Cerner and Epic customers and accounts are managed by people who came through the IT ranks and know nothing about healthcare solutions as required for consultative selling. Senior sales and consulting leadership has been RIFed. “ Unverified, so I’ve left out the name of the publicly traded company. Reports are welcome. The RIF must have been recent since I see no LinkedIn changes for the executives listed. 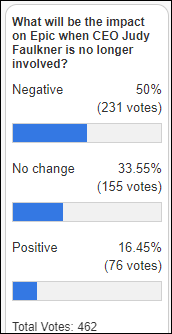 Few poll respondents see Epic as being better without Judy Faulkner. Sam observes that, like Amazon, changing CEOs shouldn’t trigger major changes since Epic’s culture is wide and deep. IIRC differs, providing examples where the departure of larger-than-life leaders has a negative company impact (giving as examples Meditech, Cerner, GE, Microsoft, and Chrysler). Others are confident that Carl Dvorak has been running the company with Judy and can easily take over, especially given the extensive succession planning that Epic has been performing for decades.

New poll to your right or here: What impact will a stock market downturn have on health IT?

Listening: Aeon Station, basically a solo project of the former co-leader of the Wrens, a band I’ve liked for years. Indie rock, especially the melodic and thoughtful kind, has been somewhat lost in a sea of vapid hip hop collaborations and diva-led formulaic hit factories, so this mature, low-tech alternative sounds fine to my ear. The duct tape that holds Kevin Whelan’s bass guitar together deserves a liner note. 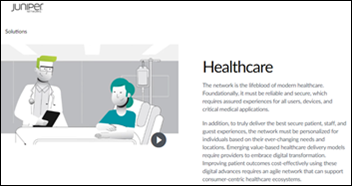 Welcome to new HIStalk Platinum Sponsor Juniper Networks of Sunnyvale, CA. Juniper Networks empowers healthcare IT leaders to deliver simplified experiences for those who run networks and the patients, clinicians, and staff who depend on them. Our solutions deliver industry-leading insight, automation, security, and AI for improved IT operations resulting in better experiences and health outcomes. Thanks to Juniper Networks for supporting HIStalk.

May 25 (Wednesday) 2 ET. “Leveling Up Your Defenses: Health IT Security and Risk Management.” Sponsor: Intelligent Medical Objects. Presenters: Lori Kevin, VP of security and enterprise IT, IMO; Nicole Pearce, JD, associate general counsel, IMO. The presenters will explain how to fortify security and respond to current threats by establishing security frameworks and managing risks introduced by ransomware attacks, breaches, and phishing schemes. They will describe the drivers of IMO’s privacy and security program, objectives for continuous review of risk management, and the framework for implementing an incident response program.

“Venture Valkyrie” Lisa Suennen applies her experience from the dot-com bust and 2008 stock market correction to predict how recent market drops might affect investors and startups:

A survey of medical students in German-speaking countries finds that while most received some form of rapidly implemented digital education during the pandemic, they didn’t like the lack of patient contact, in-person case studies and discussions, and studying PowerPoints and PDFs alone without instructor interaction. The students suggest that medical schools expand their use of online office hours, faculty Q&A sessions, and simulations and virtual reality.

A Michigan law that takes effect next year will require health plans to take action on urgent prior authorization requests within 72 hours, although a Blue Cross Blue Shield Association VP says that electronic prior authorization holds the most promise for reducing delays, citing a pilot project in which decision time was reduced 69% to six hours. 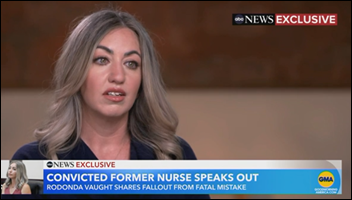 Former Vanderbilt University Medical Center ICU nurse RaDonda Vaught, who killed a patient in 2017 by giving the paralyzing agent vecuronium instead of the ordered sedative Versed, is interviewed by ABC News following her sentencing to probation:

See the Crazy Ebay Price or Make Your Own