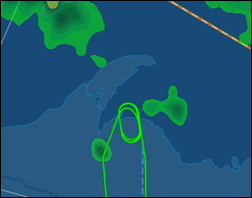 It seems like lately I have been seeing more of the patient side of healthcare than I care to. That trend continued this week as I was again pulled into the caregiver role. A close friend experienced an accident while far from home, leading to injuries that prevented them from traveling under their original arrangements. Initially, I was engaged to help arrange travel that would get them home quickly, while also accommodating medical needs. That was an adventure in itself, involving lots of phone calls, some hypothesizing about the patient’s condition, a remote airport, dense fog, and a circling plane that ultimately had to be diverted before making another attempt the next day. That kind of experience is certainly nerve-wracking for those trying to coordinate things from afar and even worse for the patient.

Because I wasn’t able to speak with the medical team at the hospital where they were treated, I was hoping to get a greater understanding of the clinical picture by reviewing the notes available in the hospital’s patient portal once the patient made it back home. Initially, I just had the information from the discharge packet, which was lacking some important elements, namely three of the four diagnoses that I expected to see based on the patient’s description of the situation and the other data on the discharge summary. However, there was an access code for the patient portal, so I was eager for the patient to login and take a look.

Unfortunately, there was a problem with accessing the portal, because despite keying in the access code and the patient’s demographic information, it wouldn’t allow us to proceed. We tried to make an account from scratch without the access code, and that didn’t work either. For some reason the system wasn’t able to validate the patient’s information. Of course, the patient knew their own demographics, and the date of birth and name were featured correctly on the discharge paperwork, so we could only hypothesize that the Social Security Number was wrong. Upon making it home, the patient called the portal assistance number on the discharge paperwork only to be told that no one could assist because it was a weekend. I joked that I hoped there weren’t any typos in the insurance information that was entered, because dealing with a denied claim can be a months-long challenge.

On Monday, the patient called the number given with the failed portal login message, and was immediately transferred not to a patient assistance line but to the hospital’s internal IT department, who couldn’t assist. After three more transfers and 40 minutes of being on hold, they finally hung up and called the Emergency Department directly. It turns out that there wasn’t a typo in the Social Security Number, but rather that it hadn’t been entered at all when the patient was registered by the Emergency Department. The receptionist was able to add it to the account, allowing the patient to finally access their information five days after the visit. We were able to see the patient’s Emergency Department progress note as well as the Radiology reports, but unfortunately there was no access to the images that would certainly be of interest to any physician with whom they’d follow up, given the nature of the injuries. There was no information on how to get the images, so we assumed there would have to be another phone call to the hospital.

On one hand, I wished the patient had known to request copies of the images while they were still at the hospital – but most patients don’t think of that, and a patient with a head injury who was having memory issues at the time definitely shouldn’t be expected to be responsible for that. The care team knew the patient was from out of state – in the facilities where I’ve worked in recent years, we’ve always been able to create a CD with images in that type of situation. It doesn’t sound like anyone offered that as an option, at least as far as the patient can remember. On the other hand, the patient doesn’t necessarily remember giving anyone a photo ID, which would be surprising in a hospital that’s part of a large integrated delivery network. At least they remember giving someone an insurance card, but all bets are off as to how the financial part of this experience will play out.

In looking at the Emergency Department note, its contents confirmed my suspicions about missing diagnoses. The physician mentioned several different findings that should have triggered additional diagnoses for the visit, but apparently didn’t. He also failed to mention the patient’s significantly elevated blood pressure and didn’t enter any comments for the patient as far as when they should follow up with someone, and what kind of physician would be advised. As a physician who has spent the last 15 years practicing in emergency care facilities, it was appalling. In every facility where I’ve worked, we’ve been encouraged to put all pertinent diagnoses on the chart and to ensure that there is a follow-up instruction noted for each and every one.

Exercising the mind: Alexa based device developed for people with dementia

We can talk about patient engagement, quality transparency, and cost comparisons all we like, but in reality, all of that goes out the window when you require emergency care. This patient didn’t have the opportunity to shop around, to vet the qualifications of those that might be treating them or see what the cost might be for what is clearly going to be an out-of-network visit. They were prudently taken to the nearest emergency facility, which is the right thing to do when you’ve experienced head trauma, loss of consciousness, and blunt chest trauma. Unfortunately, what we call our healthcare system let them down, and without advice from their friend who happens to be a physician, they (like many patients) might be unsure of what should be done next.

The lack of follow-up is particularly concerning, especially since the patient was far from home, had fractures requiring follow-up, and the emergency physician provided less than two days’ worth of prescription pain medication. This kind of thing often leads to patients taking massive quantities of over-the-counter medications as a result and isn’t ideal in a patient with elevated blood pressures. Even if the Emergency Department had a policy to only give a set quantity of pain medications, there was no option given for local follow-up either. The patient is lucky they didn’t have complications, but their pain was poorly managed and I can’t imagine traveling in that state.

I’ve thought a lot about this situation the last few days, and particularly about the health system involved. Although the hospital was somewhat remote, the health system isn’t, and frankly I expect a little better from an organization whose core values include compassion and accountability, and whose website talks about advocating for each patient it serves. I’m glad I can help the patient navigate this situation, but the need to embrace a BYOD strategy (Bring Your Own Doctor rather than Device in this case) is a sad commentary on how patients experience healthcare more often than we think. I hope some hospital administrator reads this and questions whether this might have gone on in their organization, because based on my experience as a consultant, this situation is far from unique.

What has been your worst experience as a patient? How did you manage it? Leave a comment or email me.

Q&A: Why medical device company Penumbra is betting on VR

Guide to the Best Green, Yellow, and Red Foods