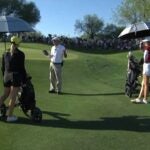 The final match of the NCAA Championship changed in this exact instant.

The Rules of Golf, as Dylan Frittelli once accurately stated, remain undefeated, and that became obvious once again Wednesday, this time at the NCAA Tournament. What more could be at stake than the team NCAA title, during the final match on the course?

But that’s the situation that Rose Zhang, the No. 1 amateur in the world, and Sofie Kibsgaard Nielsen, her opponent from the University of Oregon, found themselves in Wednesday evening at Grayhawk Golf Club in Arizona.

Zhang’s Stanford Cardinal had surrendered their early lead, eventually splitting the first four matches on the course, leaving it up to Zhang to close out Kibsgaard Nielsen. Zhang held a 2 up lead on the 17th hole when both players pulled irons from their bags and laid up … into the rough. Zhang’s came to rest about 20 yards ahead of Kibsgaard Nielsen’s.

While this may seem harmless, it’s that placement in the rough that leads to our rules debacle. Kibsgaard Nielsen hit her approach, which rolled off the front of the green — hardly a good result — but wasn’t intently watching where she was pulling her push cart.

As the Golf Channel broadcast came back from the final touches of another match, suddenly there was an issue. “As Nielsen was walking up, she actually ran over [Zhang’s] ball with her push cart, which is no penalty,” said Jim Gallagher, the on-course reporter. “They placed it as well as they could.”

Zhang was parallel with her ball, but not standing over it, so Kibsgaard Nielsen mistakenly ran over the ball with her cart during a moment when she couldn’t come into contact with it, even accidentally. After Zhang played onto the green, a rules official arrived on the scene to deliver the bad news: a one-stroke penalty.

With her opponent on the green and needing to win the 17th and 18th holes, Kibsgaard Nielsen was now lying three instead of two, in the same position, and essentially had to hole out from off the green for par to give herself a chance. When her chip settled short of the hole, the match, and the NCAA Championship, were effectively over. Zhang just had to three-putt in order to win the match, and like the Player of the Year she is, only needed two putts to get it done. The Cardinal were champions.

“I’ve never seen anything like that before,” Paige Mackenzie said on the broadcast. “The mistake off the tee, hitting it into the rough, maybe fell asleep at the wheel. It’s one of those where you wonder if maybe mental fatigue was a part of it. Not paying attention to where Rose’s ball ended up. It happens, late in the day, it’s been 95 degrees.”

And to be most fair, it may not have mattered anyway. Kibsgaard Nielsen had already played short of the green in two, and would have clearly needed a three from her position to extend the match. At the very least, it was once again another lesson of the Rules of Golf. Be careful where you’re pulling that push cart!