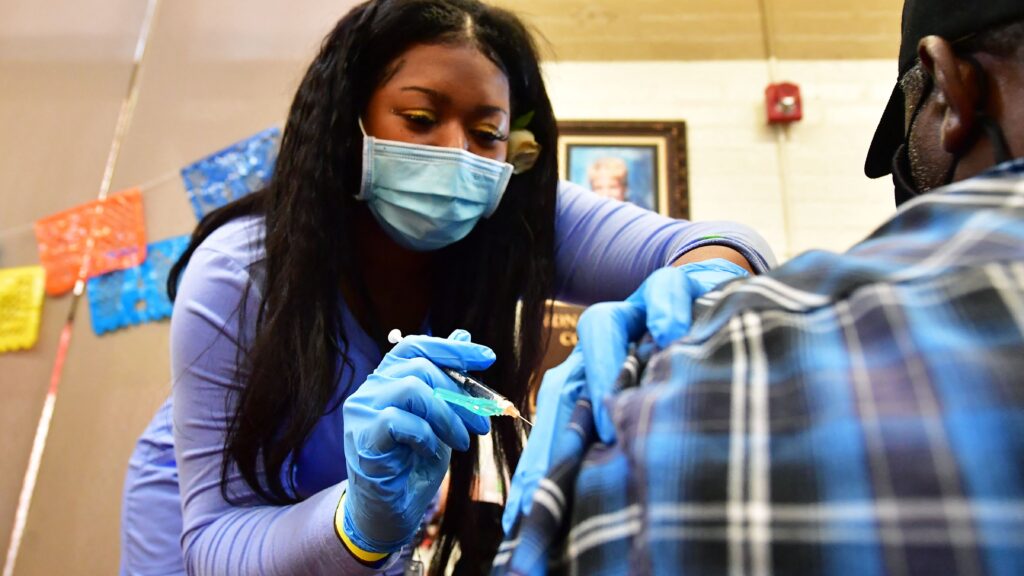 Sometime this weekend or early next week, pharmacies and doctors’ offices are going to start to receive Covid-19 boosters that have been reformulated to include protection against one of the sub-variants of Omicron.

These boosters, from Pfizer and its partner BioNTech as well as from Moderna, are bivalent shots. They target two strains of the SARS-CoV-2 virus, both the original strain that all previous vaccines have protected against, and the Omicron sub-variants BA.4/BA.5.

These products received emergency authorizations from the Food and Drug Administration on Wednesday. On Thursday the Advisory Committee on Immunization Practices, an advisory panel to the Centers for Disease Control and Prevention, recommended that they be used. CDC Director Rochelle Walensky was expected to sign off on that recommendation.

Now that these updated vaccines are a reality, you probably have some questions about who can get them, who can’t get them, and when you should time your appointment, if you’re going to make one.

We have some answers.

How is this shot different from the ones we’ve had before?

All previous Covid shots have only targeted one version of SARS-2, the original strain sequenced in early January 2020. As you know, the virus has mutated a lot since then, with a variety of variants and sub-variants having emerged.

Omicron — which has splintered into multiple families of variants and sub-variants — is so different from the original virus that it can get around or escape the protection the vaccine generates. So this shot contains a version of Omicron as well as the original vaccine.

It’s the first update of Covid vaccines, but it won’t be the last.

Who is eligible for the new boosters?

Does that mean if I haven’t been vaccinated yet, I can’t get one of these new boosters?

That is correct. You cannot.

Why can’t I get one of the updated boosters if I haven’t been previously vaccinated? Aren’t they more on target than the original vaccines?

Hopefully, yes. But these boosters come in booster-sized doses. Think: smaller. They contain less vaccine than the primary series, perhaps not enough to elicit good protection, if you’ve never been vaccinated against Covid before.

With the Moderna vaccine, the primary series was two doses, each containing 100 mcg of antigen. So 200 mcg in total. The original Moderna booster shot was 50 mcg. The bivalent booster also contains 50 mcg, but as with the Pfizer vaccine, that amount of antigen is divided equally between vaccine that targets the original SARS-2 strain and vaccine that targets BA.4/BA.5.

During a press conference on Wednesday, Peter Marks, the head of the FDA center that oversees vaccine authorizations, said that the agency is waiting for the companies to submit data related to authorizing the shots in younger children. He said that the age range in the authorization would be expected to drop over the next month or two. Marks declined to specify exactly what data the FDA will need to see to lower the age of the authorization.

During that same press conference, Robert Califf, the FDA commissioner, emphasized that overall the vaccination rate for very young children is “very low” in the U.S. and said that he hoped parents would “pick up the pace of vaccination of younger children.”

I’ve read that these boosters were authorized without any studies in people. What does that mean?

One of the hopes about mRNA vaccines is that at some point regulators would be confident enough to authorize shots that closely match circulating strains without time-consuming clinical trials, similar to the way flu shots are updated. The FDA has decided it is ready to cross that bridge. Other countries, including Canada and much of Europe, have chosen to use booster shots containing a different version of the Omicron strain, known as BA.1.

Pfizer and Moderna have both done studies in human volunteers showing that vaccines made from the BA.1 variant increase antibody titers that can neutralize Omicron strains. Similar data exist for vaccines containing previous strains. The FDA, based in part on the advice of an expert panel it convened in June, has decided that the best course is to match the vaccines to the BA.5 strain, which is causing the vast majority of U.S. Covid cases. The WHO is advising countries to use shots that contain BA.1. Either way, the shots also contain antigen from the original, or “wild type,” strain of the SARS-CoV-2 virus.

Do we know how well these updated shots will work?

Most experts think it is a safe assumption that they will work better against currently circulating strains, and will give people broader, better immunity against whatever the next strain is.

However, clinical data on how well antibodies generated by these new boosters neutralize the virus may not be available for a few months, and, as FDA officials pointed out, early data from clinical trials can be misleading. John Moore, an immunologist at Weill Cornell Medicine, has argued, for various technical reasons, that predictions of the efficacy of the new bivalent vaccine are uncertain. Paul Offit, of Children’s Hospital of Philadelphia, even worries they could even be less effective than a booster shot of the original vaccines.

What do we know about the safety of these new boosters?

No one has raised new, credible safety concerns about the boosters; they’re expected to be very similar to the existing vaccines, which have now been given to billions of people.

An important point: The most serious side effect that has been seen with the mRNA vaccines, myocarditis, is so rare that the types of clinical trials that would be done before authorization of a booster affecting a new strain would be far too small to pick it up. Even studies involving tens of thousands of patients might not see a single case. For those kinds of issues, the only option is to carefully monitor what happens once the shots are in use. But, again, there is no reason to believe that these boosters will be different from what came before.

I thought there were going to be boosters from more than these two companies. When will there be other options?

So far, the first-mover advantage for Pfizer-BioNTech and Moderna has been difficult for any other vaccine maker to surmount. Two other vaccines, from J&J and AstraZeneca, have fallen to the wayside because of an incredibly rare but scary side effect involving both dangerous blood clots and severe bleeding.

Novavax, whose vaccine was just authorized as a primary series, said it expects emergency use authorization of its vaccine as a booster in adults aged 18 and older. At the FDA advisory panel in June, Novavax presented data arguing that its original vaccine had efficacy against the BA.5 variant. The FDA has not yet weighed in on that data.

If I had Covid this summer, when can I get the new booster?

First of all, if you currently have Covid, the CDC says that “at a minimum” you should wait until you’ve recovered to get a shot.

If you’re an adult or a child and have recently had multi-inflammatory syndrome — called MIS-A for adults and MIS-C for children — the CDC suggests you should hold off getting an updated vaccine until you’ve recovered from being ill and 90 days since your diagnosis.

If you had Covid but didn’t develop multi-inflammatory syndrome, the CDC suggests you could consider waiting up to three months before getting the booster. But it also notes in your calculations about how to time your booster, you might want to take into consideration personal factors, such as how high your risk is of having severe disease should you become infected, and how much transmission is going on where you live.

How long do I have to wait after previous Covid vaccinations to get the updated booster?

You need to wait at least two months after having had the final dose in your primary series and the same length of time after having had a booster before getting one of the updated boosters.

I’m immunocompromised and I’ve already had five doses of Covid vaccine. Am I eligible to get another shot now?

Yes, as long as it’s been at least two months since your most recent Covid booster.

Will the shots pack the same kind of punch as the earlier booster?

We won’t really have an answer to this until these shots start going into people’s arms.

In general, though, most people who have had reactions to the mRNA vaccines reported them after the second shot. Rates of reactogenicity have declined with each successive shot since then, data that were presented Thursday to the Advisory Committee on Immunization Practices showed. The ACIP is an advisory group that makes recommendations on use of vaccines to CDC Director Rochelle Walensky; it recommended Thursday that these boosters be used.

That said, that’s not true for everyone. At least one of us had high fevers, fatigue, and other temporary symptoms after the third and fourth dose — symptoms that were more pronounced than after dose 2.

Will I need to get a booster shot every year?

That’s the schedule many infectious disease experts want to see, but we’re not there yet. Part of the issue has been the speed of new variants’ rise; they haven’t been following a seasonal pattern, making it difficult to know exactly how often boosters might be necessary.

Still, Biden health officials stress that, for now, getting the new boosters could curb an expected case surge this fall and winter, which they worry could coincide with seasonal flu. Pharmaceutical companies are working on vaccines that combine protections for both viruses, but those are still in early research stages. In the meantime, pharmacists have encouraged people to get a Covid-19 booster and the seasonal flu shot at the same time. Eventually, coronavirus boosters could be a part of our fall schedule.

I’ve had four doses of Covid vaccine and my CDC card is full. What happens now?
This one is simple. You’ll get a second card when you get your next booster.

The CDC has told vaccine providers that if they are vaccinating someone whose Covid vaccine record card is full, they should fill in a second card for the individual. People getting a second card should take and store pictures of both cards, and staple the two together.

Tips for Finding the Right Inpatient Treatment Center in Florida