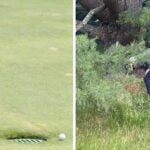 Justin Thomas, left, and Rory McIlroy both found themselves in rules discussions in the third round of the U.S. Open.

The Rules of Golf, and the thousands of sub-rules and interpretations within them, are voluminous for a reason: On a 150-acre playing field just about anything can and does happen.

On occasion, though, the laws of the golfing land alone are not enough to decide a ruling.

On the par-4 4th hole Saturday at The Country Club — this was in the third round of the U.S. Open — Justin Thomas’ drive came to rest a couple of inches from a drain cover. If you quickly glanced at the position of his ball, which was also on a slight downslope pitched toward the drain, you might have assumed that relief was forthcoming. It might have been, if not for one thing: Thomas’ determination‚ after a discussion with a rules official, that the cover was, in fact, unlikely to impede his swing.

After his round, Thomas said that he “very easily” could have told the official that the cover was potentially a problem for him and “gotten a free drop.” But “in the spirit of the game,” Thomas said, he elected not to.

His ensuing wedge shot, from 165 yards, was not a good one. Thomas caught too much turf and dumped his ball into a bunker in front of the green, leading to a bogey 5. If the drain wasn’t in Thomas’ way, it more than likely was in his head, because for a player of Thomas’ caliber the chunky approach was a stunningly bad result. Alas, as Craig Winter, the USGA’s rules chief, said on the NBC telecast, “Mental interference doesn’t grant one relief.”

Moments after the shot, Thomas’ remarks to on-course reporter Jim “Bones” Mackay, which Sky Sports mics picked up, revealed Thomas’ deeply conflicted feelings about the ruling he had essentially enforced on himself.

“That’s what pisses me off,” he told Mackay. “Because so many other people would lie about being able to hit that, but it’s just like, I’m not going to hit it. I’m just trying to be a good f—in person. That’s f—in bulls—, man.” (Warning: video below is uncensored.)

After signing for a two-over 72 that has him at three over for the week and seven back of leader Will Zalatoris, Thomas revealed more about his headspace on the 4th hole.

“I could only hit the ball — I only hit it 100 yards,” he said. “I mean, yeah, it’s very clear that my stance and where my ball was was altered and sitting bad because of that drain, but didn’t get a drop from it. That’s just how it is. You have to be able to hit the drain [during your swing] to get a drop.”

That’s true, but, really, a player need only convince an official that he or she might hit the drain. Thomas likely could have accomplished that without too much lobbying, because if we have learned anything from rules officials at professional golf tournaments in recent years (the hero who denied Bryson DeChambeau fire-ant relief not withstanding) it’s that they generally give players the benefit of the doubt. A brand-name 15-time Tour winner and son of a beloved PGA club professional seeking relief from that unfortunate lie? Show me an official with the fortitude to reject that request.

Instead, Thomas gamely elected to play the ball from where he found it. We can quibble about whether he should have openly griped about the ruling — Thomas’ commentary undoubtedly stripped some of the feel-goodness from the episode — but ultimately he did the right thing. Thomas felt he didn’t genuinely need relief so he didn’t take it.

Later in the third round, the intersection between the rules and player opinion again came to the fore, this time with Rory McIlroy. When McIlroy tugged his tee shot on 18, he found his ball in a tangle of rough and other unpleasantness but also in the vicinity of a grandstand. “Oh, no,” he said to himself when he realized his ball was squarely in wedge-out country.

But then a rules official informed McIlroy that he could take relief from the structure if McIlroy believed — if given relief — that he could realistically work his ball around all the trouble and back in line with the pin. Another judgement call, similar to Thomas’, to which McIlroy replied, “Well, I can hit a draw pretty good, so, yeah, I think I can do that.”

So the official granted McIlroy relief, opening up a much clearer, if still challenging, path to the green. “I still had to hit a pretty big draw around that tree, but it was a huge break,” McIlroy said. “If that grandstand hadn’t have been there, I’m sort of just chipping out, and 5 was probably the score I would have made.”

Instead, McIlroy hit a beautiful shot to the back-middle of the green and two-putted for a 4 that kept him within three of Zalatoris heading into Sunday.

“It was fortunate,” McIlroy said of the drop.

Thomas enjoyed no such good fortune, and judging from his post-round comments, the ruling seemed to gnaw at him. The rules have a way of doing that, especially when hard answers come not from the rule book but from the players themselves.

As GOLF.com’s executive editor, Bastable is responsible for the editorial direction and voice of one of the game’s most respected and highly trafficked news and service sites. He wears many hats — editing, writing, ideating, developing, daydreaming of one day breaking 80 — and feels privileged to work with such an insanely talented and hardworking group of writers, editors and producers. Before grabbing the reins at GOLF.com, he was the features editor at GOLF Magazine. A graduate of the University of Richmond and the Columbia School of Journalism, he lives in New Jersey with his wife and foursome of kids.

How does Ozempic help you to lose weight