Remaking Disney’s animated 1940 classic Pinocchio as a live action film was always going to be a challenge, and director Robert Zemeckis makes a few notable updates to the screenplay with Chris Weitz — including, to a degree, the way the story ends.

But wow, should they have paid more attention to one particular song lyric.

Along with Pinocchio‘s existing classics “When You Wish Upon a Star” (this time sung by Cynthia Erivo as the Blue Fairy) and “I’ve Got No Strings,” four songs were written by Alan Silvestri and Glen Ballard for the live remake, including one that sees Tom Hanks’ Geppetto singing the line “Pinocchio! Pinocchio! Holy smokey-o!” in earnest.

But one song, “The Coachman of Pleasure Island,” contains one of Disney’s most questionable lyrics yet (one of, though, no one’s taking that award from Aladdin).

‘Pinocchio’ review: One of Disney’s darkest films lightens up (a little) with Tom Hanks

After escaping a creepy child-captor, Pinocchio lands right bang in the clutches of another one, finding himself on the vehicle of the Coachman (played by Luke Evans). It’s one of the film’s darkest and most uncomfortably sinister storylines: the Coachman in the original film is a lecherous man who “collects stupid little boys” and carts them off into a hedonist theme park called Pleasure Island (eep), which is essentially a trap in a human trafficking scheme — yep, in a kids’ movie. In the live action version, Evans tones down the original Coachman’s creep factor, but still channels a Fagin-like energy to his child-kidnapper role. 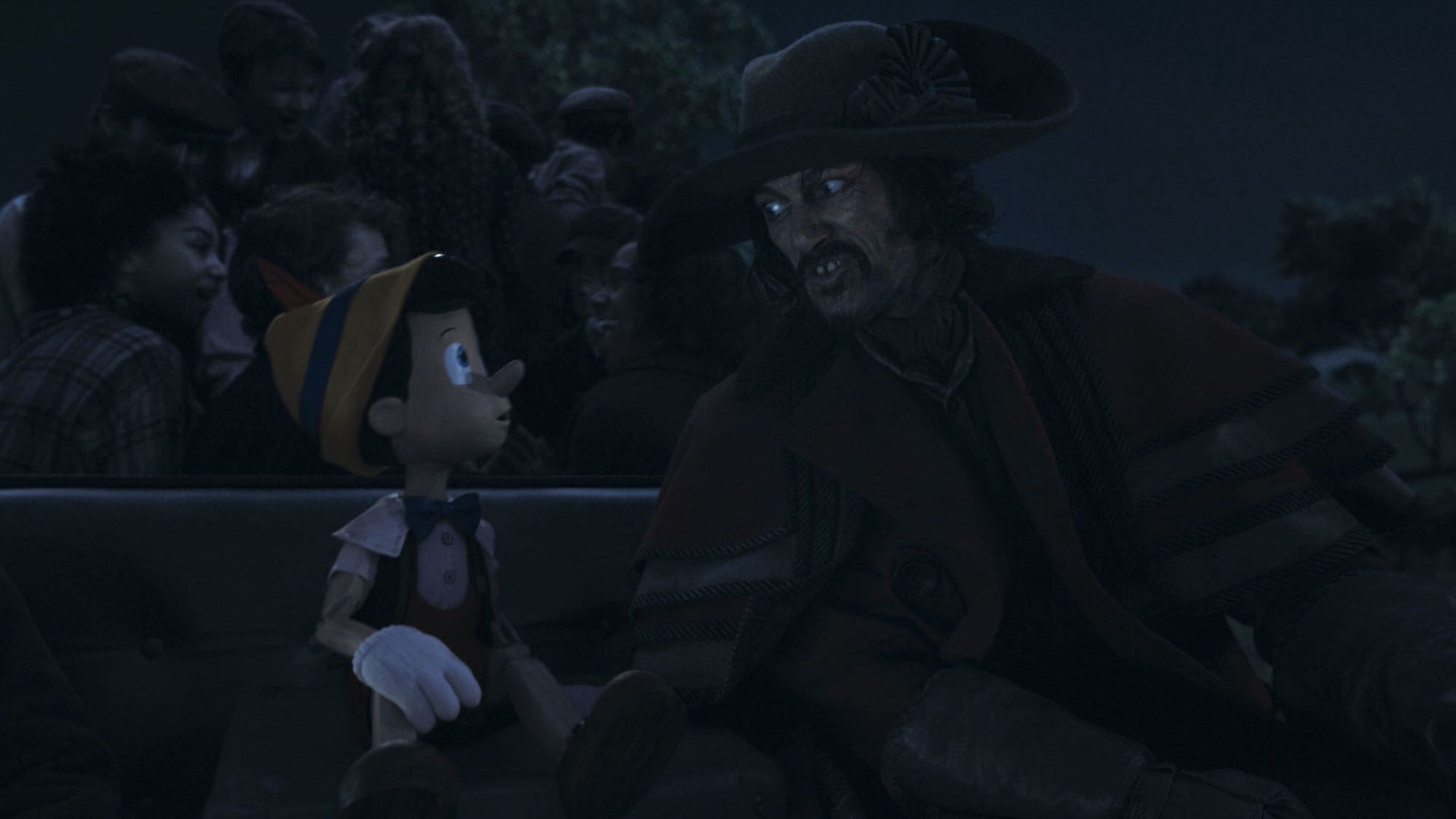 Luke Evans as the Coachman, taking his human trafficking haul to Pleasure Island (I am not joking).
Credit: Disney

Evans, a Disney live action alumni who took on Gaston in Beauty and the Beast, gets his own new song, “The Coachman of Pleasure Island,” a sinister ditty about peer pressure, denying one’s conscience, not being a “party pooper,” and threatening convincing Pinocchio to join his little kidnapped cart of children to their destination. The new film has added girls to the Coachman’s cart (so progressive!), which appears to be a step toward addressing the 1940 film’s failings. But the film shoots itself square in the foot with a truly misogynistic lyric awash in conventionally gendered nonsense.

I’ll let you read that again. Even listen to it, and tell me if I’m hearing it wrong.

For a film that actually starts off on the right foot in its obsession with whatever the hell a “real boy” is supposed to be —  “You have to prove that you are brave, truthful, and unselfish,” according to the Blue Fairy — it cannonballs into noooope territory with one line. The song isn’t in the original film, so the songwriters have added this line to a film song released in 2022. When the Coachman sings “Real boys always want more,” he’s inevitably referring to the piles of candy and pints of root beer awaiting them at Pleasure Island, but the line doesn’t specify this at all, instead seemingly champions a general sense of toxic masculinity in children.

The second line “Real girls always like the real boys more,” is sung by the girls on the cart. Are they brainwashed? According to this song, “real girls” prefer the “real boys” who “always want more”. This complete nonsense is blatant promotion of gender roles and compulsory heterosexuality, feminist Adrienne Rich’s concept that our culture always steers us to see any connection between women and men, girls and boys, as romantically inclined. Plus, it’s worth pointing out the restricted cisgender binary here, and the lack of acknowledgement for non-binary, transgender, and gender non-conforming kids — an inclusion of whom would have been an awesome move from Disney in a film that actually takes pains to determine “real boys” by their bravery, honesty, and altruism.

Yes, all these kids get their comeuppance for bowing to peer pressure — but the Coachman notably does not. However, in a time where speaking out against misogyny, and working to dismantle systems of oppression must be prioritised even from an early age, why did Disney think an entitled, sexist lyric like this would be fine? Yes, this song is sung by a villain, so is meant to demonstrate the most putrid of opinions, not to be taken on as one’s own — I assume it had lofty “Poor Unfortunate Souls” ambitions. But distinguishing between the villain’s dubious song lyrics and the overarching message of the film seems a bit of an ask for kids, who tend to take things literally more often than not.

Maybe you’re fine with this line, maybe it’s struck a minor chord with me only. But I dread the thought of kids singing this arguably catchy song in the playground in 2022 — and even worse, believing those words and reinforcing the gender roles we should be trying to dismantle, including in popular culture.

Is ‘Wheel of Fortune’ Rigged? Host Pat Sajak Spoke Out on Twitter About Longtime...

7 Best Protein Powders for Women of 2022