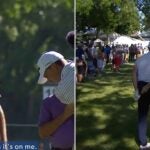 Jordan Spieth on Thursday on the 18th hole at Colonial Country Club, left, and the 15th hole.

Stop us if you’ve heard this one before.

“I feel like if it just nicks a leaf or something, it’s short. I think it’s got a chance to get right through that. I think it’s the right height for this club. I think a good shot on either one — just a really good shot on this one is way better than really good on the other, and I think an average shot on both is in the same spot. And then it could be really bad either way, too.”

This one may also sound familiar.

“What don’t you see? I was going to hit a straight punch at the cameraman with a punch cut and just get it to cover over the water and hit it hard.”

Two shots, three holes apart, all Jordan Spieth. For him, never mind the dozen or so trees on each at Colonial Country Club. Or the seven combined bunkers. Or the water on the second one. Or that Michael Greller, his longtime caddie, was waving him off that one, too. And for you, forget that this is a repeat. Yes, you’ve seen this bravado before. But Spieth’s theatrics hardly get old.

“Sometimes when you put these guys in a spot like this, they pull off some amazing shots,” analyst Curt Byrum said on Golf Channel’s broadcast.

Indeed. Byrum was speaking before the first of the two shots hit during Thursday’s first round of the Charles Schwab Challenge, and we’ll begin there. On the 420-yard, par-4 15th, Spieth went left off the tee and, from there, had really two options — the safe play, or the Spieth one. Safe would have been a punch-out that navigated a collection of trees about 25 yards in front of him and possibly greenside bunkers about 100 yards away. Or …

“Looking up,” analyst Trevor Immelman said on the broadcast.

And up it went. Spieth’s thought process was picked up by Golf Channel mics and was the first quote above — he saw a window through the branches and believed “just a really good shot on this one is way better than really good on the other, and I think an average shot on both is in the same spot.” The result? The ball cleared, and it dropped just onto the fringe of the green (where he took three shots from there and bogeyed).

“I mean, are you kidding me,” Knost said on the broadcast. “That is unbelievable. I didn’t think there was any chance he could get it over the trees from that lie.”

Three holes later, on the 434-yard, par-4 18th, Spieth was left off the tee again. And among the trees again. This time, water was in play; it was on 15, too, but out of reach (though this is Spieth, of course). Also on this shot, player and caddie were in disagreement, with the conversation picked up by Golf Channel mics.

Spieth wanted to hit a punch cut under the trees. Greller did not.

“What don’t you see?” Spieth said. “I was going to hit a straight punch at the cameraman with a punch cut and just get it to cover over the water and hit it hard.”

“I’m just saying how it’s coming out of here, if it pops up, you know …” Greller said.

“No, just hit it here and then hit a wedge and …” said Greller, pointing out to the right of the trees.

Then, after a pause, Spieth said:

“I mean, guys, he sees things that other people don’t see,” Knost said on the broadcast. “Obviously his caddie, Michael Greller, doesn’t agree with this at all, and neither do I.”

“Translation is, Michael, I got this, just take the bag over there and watch,” Immelman said.

“One of them is about to be right,” Knost said.

The result? Spieth’s ball ran up onto the green, nearly hit the flag and just trickled off. He hit two shots from there and finished with a one-under 69.

“Well, once again, he proves us all wrong,” Knost said on the broadcast. “Absolutely unbelievable. Shots like that make me really not like him.”

Nick Piastowski is a Senior Editor at Golf.com and Golf Magazine. In his role, he is responsible for editing, writing and developing stories across the golf space. And when he’s not writing about ways to hit the golf ball farther and straighter, the Milwaukee native is probably playing the game, hitting the ball left, right and short, and drinking a cold beer to wash away his score. You can reach out to him about any of these topics — his stories, his game or his beers — at nick.piastowski@golf.com.

How to Pick a Good Watermelon, Health Benefits and New Ways to Serve It