Dinner proceeds of over $100,000 to benefit IFPA’s Foundation for Fresh Produce 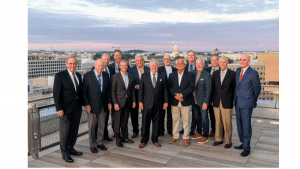 IFPA CEO Cathy Burns began the program by reflecting on her close relationship working alongside Tom for the past 15 years. In her remarks, Burns praised Stenzel for his steadfast commitment to advance the produce industry, while highlighting just a few of his many accomplishments throughout his three-decade career.

“Our industry needs more dedicated leaders like Tom, a fearless leader who truly cares not just about the industry, but more so, the people in it,” said Burns. “His tireless dedication over the decades is legendary and we are all better for it.”

In March 2021, Tom and Cathy achieved a longtime goal for the fresh produce industry by helping launch the International Fresh Produce Association, a new association formed by the combination of United Fresh and the Produce Marketing Association.

Over $100,000 in individual donations and proceeds from the dinner will be contributed to IFPA’s The Foundation for Fresh Produce. 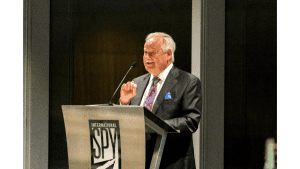 That same year, Tom led United to create The Washington Public Policy Conference, which continues today as the leading opportunity for the fresh produce industry to engage with policy makers. Additionally, with support from DuPont (now Corteva), Tom and the United Staff launched the Produce Industry Leadership Program. More than 250 industry leaders have graduated from the program which is still active under IFPA.

In 2008, Tom united various specialty crop associations to ensure the Farm Bill benefited both the produce industry and the public, by increasing access to fresh produce as well as supporting research to help the industry.

Three years later, in 2011, Tom was named the president of the International Federation for Produce Standards (IFPS), an organization of produce trade associations focused on improving the supply chain efficiency of the fresh produce industry through developing, implementing, and managing harmonized international standards.

That same year, Tom was appointed to the US Chamber of Commerce Committee of 100, comprised of leaders of trade associations in various industries that represents the interests of association members before the U.S. Chamber’s board of directors.

In 2016, United Fresh and PMA assembled an industry workgroup to develop an ethical charter (released in 2018) to promote responsible labor standards across the produce and floral industries. This was a major effort between United Fresh and PMA, and it laid the groundwork for a close working relationship between Tom and Cathy and their associations, culminating in the coming together of PMA and United Fresh to form IFPA in 2022.

The International Fresh Produce Association (IFPA) is the largest and most diverse international association serving the entire fresh produce and floral supply chain and the only to seamlessly integrate world-facing advocacy and industry-facing support. We exist to bring the industry together to create a vibrant future for all. We grow our member’s prosperity by conducting advocacy; connecting people and ideas; and offering guidance that allows us all to take action with purpose and confidence. While IFPA is built on the legacy of United Fresh and Produce Marketing Association, it is not just a combination. It is transformational. Recognizing the industry required an even more powerful and unified voice, the leaders of the former United Fresh and Produce Marketing Association chose not to merge, but rather to create an entirely new organization to supersede their organizations, effective January 1, 2022.

How Juvederm Works for Lip Augmentation

How to Look After Ourselves When We’re Depressed