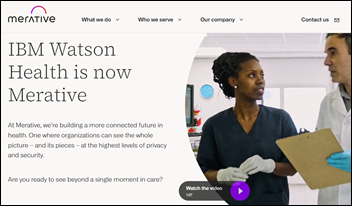 Francisco Partners completes its acquisition of the data and analytics assets of IBM Watson Health and renames the business Merative.

Chosen as CEO is industry long-timer Gerry McCarthy, who has served in executive roles with ESolutions, TransUnion, HealthMEDX, and McKesson. The company’s headquarters will be in in Ann Arbor, MI. Former Watson Health Paul Roma will transition to senior advisor to Francisco Partners. Much of the remaining IBM Watson Health executive team will remain in place.

The company, which FP acquired for a reported $1 billion versus the $4 billion IBM spent to create it from a series of acquisitions, will organize around six product lines – Health Insights; MarketScan; Clinical Development; Social Program Management and Phytel; Micromedex; and Merge Imaging solutions.

From Spare Change: “Re: return to office. We are seeing the result of employees who have power like they have never had, the ability to work from anywhere.” I think that moment was fleeting. Economic and industry conditions have put bosses back in charge and they know that they need to manage costs while fretting less that their employees might flee to greener pastures. I never understood the “great resignation,” assuming (perhaps naively) that the same number of people still need to work and the total number of available jobs hasn’t changed much even though job mix has shifted. Some jobs can be performed remotely (and always could have been), but work-from-home was, like telemedicine, a temporary compromise whose adoption will settle at numbers higher than pre-pandemic but much lower than in 2020-21. I bet many executives agree with me that you can’t build and maintain a great company when employees are doing task work in their living rooms and communicating via Slack and Zoom while missing face-to-face meetings, chance encounters, personal relationships, and exposure to broader company work. I expect companies to compromise by offering a hybrid model of 1-2 offsite work days per week or maybe going with a permanent four-day workweek, which adds flexibility and reduces commute headaches but without conferring geographic freedom. Employee threats to sell their services elsewhere if they are required to show up at the office are ringing pretty hollow now versus a year ago. Have you seen a shift in the employee-employer dynamic in the last couple of months? 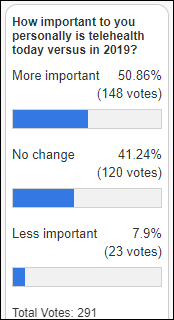 It’s about an even poll respondent split between telehealth being more important now versus in 2019.

New poll to your right or here: From your most recent encounter, how much of the clinician’s time seemed to be spent on tasks that lower-level people could have done? My perception is mixed – sometimes it seems that being the only person in the room with the patient makes the clinician feel that it’s easier to do low-value work than to bring someone in to help, or lures them into a comfort zone of happily performing comfortably mindless work.

HIStalk sponsors: prices will increase a bit starting January 1, 2023, although the cost will still be less — taking inflation into account — than in 2014, when it last changed. This is the cue for on-the-fence companies to sign up sooner rather than later.

Concierge primary care operator One Medical is reportedly considering its options after attracting and then rejecting preliminary acquisition interest from CVS Health. Shares in One Medical’s parent company have lost 75% of their value in the past year, giving the company a market cap of $2 billion.

CaringWays taps Clearwater to develop and implement a cloud-based cybersecurity and compliance program for its digital fundraising software for patients. 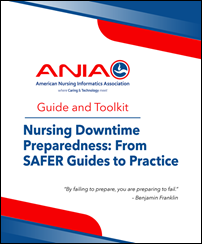 The American Nursing Informatics Association publishes the first in a series of toolkits that support the practice of nurse informatics. 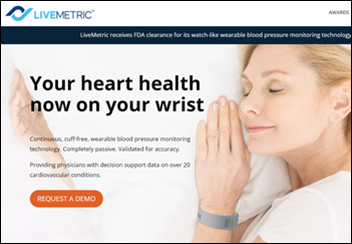 FDA gives clearance for LiveMetric’s LiveOne, a wrist-worn monitor that takes blood pressure from the radial artery every 10 seconds and records the results over several days to help understand the connection between BP and lifestyle, behavior, and medications. 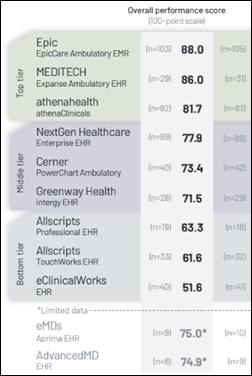 A new KLAS report on EHRs for practices of 11 or more clinicians finds that Epic and Meditech lead the the pack in finishing a close 1-2. Ease of use and workflow is by far the most pressing concern of practices of that size. Cerner users are frustrated with outpatient workflows and the company’s focus on resolving inpatient problems, while Greenway Health’s customers are an outlier in putting functionality improvements at the top of their list of needs. Allscripts has two of the three bottom-rated products, along with poor ratings for support, relationships, and overselling product capabilities.

A California Medical Association bill would require health plans to exempt doctors from obtaining prior authorization for prescriptions if they have historically practiced within that plan’s rules 80% of the time. Other physicians would be given the right to have their PA appeals conducted by a physician in their specialty.

Damages in Epic’s 2016 trade secrets lawsuit against Tata Consultancy are reduced by a federal court to $140 million. The original damages assessed to Tata were set at $940 million, but were reduced to $420 million and later to $280 million. 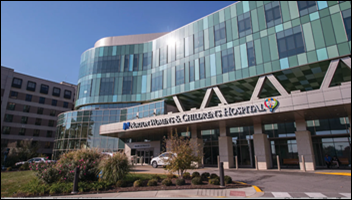 Munson Healthcare’s virtual urgent care program sees an uptick in usage that it says is mostly due to word of mouth. It triages patients to video visits after initial phone screenings and has seen 250 patients as of early June. It is staffed by 20 Munson physicians who pick up shifts on their days off. Next up for Munson is patient text messaging and enhancing the system’s doctor-finder tool with online scheduling.

An end to progress? – Healthcare Economist

Changes We’re Expecting to See in the Healthcare Industry