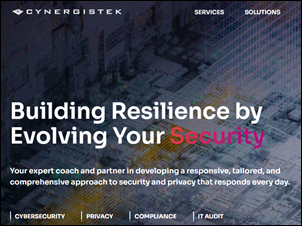 CTEK shares, which were trading at around $0.60 on the NYSE American small-cap market before the announcement, were down 65% in the past 12 months and were 91% off their 2017 all-time high.

From Lollygagger: “Re: Arnot Health. Has an ongoing technical issue that is affecting ambulatory offices and the patient portal.” The health system says its downtime, which has persisted for more than a week, is not related to malicious activity.

From Kermit: “Re: Jamcare Medical. An interesting niche. Wonder how they handle the documentation?” Jamcare Medical, which seems to be a non-profit, provides medical services such as crisis intervention and drug intervention to music festivals and concerts, which it says avoids unnecessary medical transports and legal involvement for their promoters. Basic service includes a team to help management overdoses and behavioral health issues; its middle-tier offering provides the complete first aid response team, a first aid booth, and around-the-clock grounds surveillance to prevent problems such as “dehydration, fights, and slips and falls;” while its premium package adds an onsite or online physician.

From Long-Time Fan: “Re: medication adherence. We are building a solution and seeking beta partners such as payers, manufacturers, and health systems, anyone who has a vested interest in helping people with chronic conditions take their medications regularly. Do you know of specific organizations that are open to new adherence solutions?” I do not, but I’ll invite readers who have that interest, or know who might, to email me and I’ll forward the information (this is a early-stage company that isn’t quite ready to make a public splash).

From Pajeet Pete: “Re: Ascension. Gerry Lewis is out, replaced by Gagan Singh.” Gerry is still listed on the executive team page and hasn’t changed his LinkedIn, but Gagan’s LinkedIn shows that he was promoted from chief data officer to SVP/CIO this month. A layoff discussion board entry says Lewis left as of May 13. He was also CEO of Ascension Technologies, whose web page now lists Singh as SVP/CIO. They outsourced a lot of IT work offshore, which continues to draw discussion board vitriol.

From Mark: “Re: wearables. A recent panel concluded that a problem is keeping the devices charged.” Experts say that one of the biggest compliance challenges for remote patient monitoring is that the devices needed to be recharged, leading to hopes that someone will figure out how to power them from body heat or kinetic energy.

Walmart and CVS will stop accepting controlled drug prescriptions from online ADHD providers Cerebral and Done, which face a federal review of their compliance with controlled substance prescribing. Both ADHD companies also mail out prescriptions directly to their customers, which seems to be a touted feature, so it isn’t clear what percentage of their prescription volume goes through the drug chains. It’s an interesting situation:

A leaked presentation from Silicon Valley VC firm Sequoia Capital says that the market boom is over, predicts that recovery will not be quick, and warns its portfolio companies that they should review projects, R&D spending, and marketing expenses to prepare for cutting costs to avoid a “death spiral.” 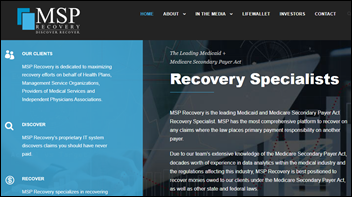 I’ve written previously about Miami-based MSP Recovery, which recovers inappropriate Medicare payments for which Medicare does not have primary payment responsibility. The company announced last fall that it would go public via a SPAC merger at a valuation of $33 billion, $23 billion of which would have flowed to the pockets of founder and CEO John Ruiz, who also runs a law firm that represents MSP in claims. The money-losing company, which claimed it would generate $5 billion annual profit by 2026, began trading on the Nasdaq Tuesday, then lost 60% of its value in its first few minutes of trading after opening at $10 per share. MSPR shares have continued their journey south, now trading at $2.56. Trial lawyer Ruiz just bought a $25 million house in Coral Gables, FL, owns another estate he bought for $49 million from the founder of Leon Medical Centers, and zips above mere mortals in his personal jet, a Boeing 767.

How They Work, Effectiveness and More 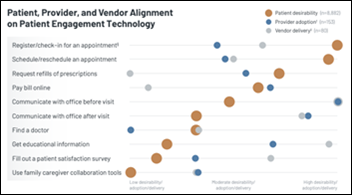 A new KLAS report finds that health systems and vendors aren’t delivering the patient engagement tools that many patients want. Providers and vendors fall short of expectations for self-scheduling and prescription refill requests, but have overdelivered on technologies in which patients have limited interest, such as pre- and post-visit communication, patient education, and satisfaction surveys. While most patients are satisfied with virtual visits, they would like to gain a better understanding of the kinds of issues that aren’t best managed by telehealth, be sent an email link before the virtual visit, and spend less time waiting for the clinician to join. Few patients use patient portals regularly, and those who do are more interested in scheduling appointments, requesting refills, and messaging providers than using provider-benefiting services such as updating insurance information or paying bills. 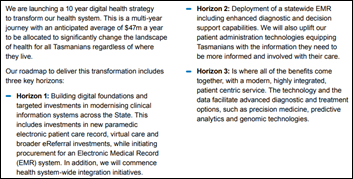 Australia’s state of Tasmania will spend $106 million to trial a statewide EHR and patient record viewer in a four-year project that will connect all public and private providers. The state’s overall digital health plan calls for spending $336 million over 10 years.

Miruna Sasu, PhD, MBA, president and CEO of real-world oncology data vendor Cota Healthcare, says that FDA could facilitate the use of real-world data by capturing it cleanly in the EHR so that it looks similar to clinical trial data instead of trying to clean it up afterward.

The VA launches Mission Daybreak, a $20 million challenge program to develop suicide prevention solutions, including the use of digital footprint data and technology that improves access to the Veterans Crisis Line.

The lab manager of the VA’s Walla Walla, WA medical center says its newly implemented Cerner system saves employees three hours per day by digitally tracking specimens. He says his goal was to ignore the negative narrative about Cerner and instead spend time preparing for the implementation.

A GHX survey of senior healthcare leaders finds that staff shortages and burnout is their top concern, with 80% of them planning to use automation to reduce manual labor. 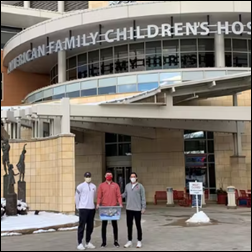 ‘How I Met Your Mother’ Creator Carter Bays on Why His Family Embraces Screen...

How to Slice and Dice Using a Chef’s Knife