Former VA Secretary David Shulkin, MD says in an opinion piece that Congress should create a licensure compact program that would allow states to recognize each other’s medical licensees.

Shulkin says the process should work like the national driver license compact, where drivers obtain one license and can drive in any state as long as they follow that state’s regulations. That is different from telehealth laws, in which the patient’s location rather than the provider’s defines the licensure requirement.

Shulkin touts the VA’s success in relaxing geographic limits so that clinicians can be assigned to locations as needed and can perform home visits.

Jay Sanders, MD of The Global Telemedicine Group, notes in a LinkedIn comment that telemedicine is already a puzzling outlier – doctors can see any patient in person as long as that patient comes to their location, with telehealth being an electronic version of that same interaction. Also noted by other commenters, however, is that the similarly structured Nurse Licensure Compact has not been adopted by 11 states that still require their own specific licensing. 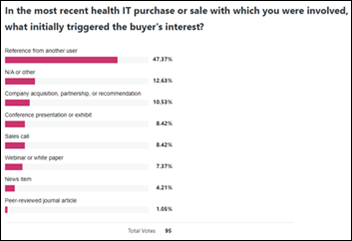 Poll respondents who were recently involved in a health IT purchase most often attribute the initial interest to references or company recommendations.

New poll to your right or here: Does your employer require most or all employees to be vaccinated against COVID-19? Reports suggest that some companies have rescinded their mandatory vaccination policies not because of new scientific knowledge, but because they were losing employees to competitors who didn’t make vaccination required. 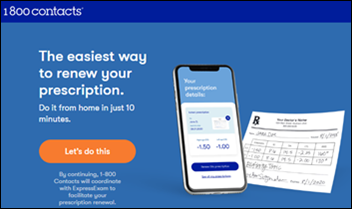 Mrs. HIStalk’s (now-former) eye doctor practice was unyielding in its refusal to sell her a box of contact lenses to tide her over until their next-available appointment in November even though her prescription has never changed. A couple of minutes of Googling turned up several contact lens companies that let you do a quick-and-dirty (albeit questionably effective) online eye exam. She did a five-minute, $20 exam through 1800contacts standing in front of her computer, received a prescription PDF signed by a state-licensed ophthalmologist shortly afterward, and ordered contacts through Lens.com, which  was cheaper and faster than her usual supplier Costco (not to mention that their online exam is on sale for $10, I now realize). An online exam isn’t worth much other than for verifying that refraction hasn’t changed, if even that, but I assume it fulfills a market need in which doctors generate short-term prescriptions without the ability to offer short-term appointments.

Thanks to the following companies that recently supported HIStalk. Click a logo for more information.

September 22 (Thursday) 1 ET. “ICD-10-CM 2023 Updates and Regulatory Readiness.” Sponsor: Intelligent Medical Objects. Presenters: June Bronnert, MSHI, RHIA, marketing director, IMO; Julie Glasgow, MD, marketing manager, IMO. The yearly update to ICD-10-CM is almost here. Prepare your organization for a smooth transition, and avoid any negative impacts to your bottom line, with an in-depth look at the upcoming changes. Listen to IMO’s top coding professionals and thought leaders discuss the 2023 ICD-10-CM coding changes. This webinar will review additions, deletions, and other revisions to the ICD-10-CM code set and how to make sure you get properly reimbursed.

A study of private equity-acquired ambulatory surgery centers finds that unplanned hospital visits, cost, and encounter volume were no different afterward compared to ASCs that were not acquired.

The shutdown of Amazon Care will drive 159 Amazon layoffs in Washington, while another 236 will be let go from its medical provider Care Medical, according to company notifications to the state.

Health coaching and wellness app vendor Twill lays off 10% of its headcount, two months after changing its name from Happify Health.

Verily announces a $1 billion funding round led by Alphabet, the replacement of its CEO, and the resignation of its CFO. The company says it will use the funding proceeds to expand its work on precision health, including real-world evidence generation, healthcare data platforms, and research.

Francis Collins says genetic research is at a turning point 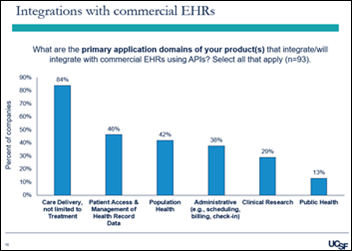 A UCSF-led survey of digital health companies and their experience with EHR integration finds that: 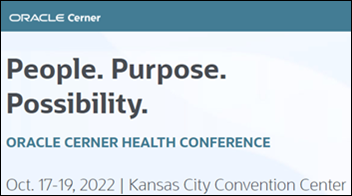 The Oracle Cerner Health Conference will return as an in-person event October 17-19, also offering a virtual track to those who prefer to attend remotely.

A study finds that expanded use of telehealth during the pandemic did not increase the overall use of primary care services, suggesting that it is serving as an alternative to in-person encounters instead of adding costs.

In England, hospitals of Manchester University NHS Foundation Trust report delays of 12 hours and more along with cancelled appointments as they go live on Epic in a project they have named Hive.

I received a PR pitch from investor-backed, Toronto-based veterinary telehealth service Vetster, which cites a study that found that the US needs 41,000 additional veterinarians by 2030 as existing practices are being overwhelmed by a pandemic-driven increase in pet ownership that has backed up appointments for up to five months and cause some vets to stop taking new patients. The company says its telehealth marketplace for non-urgent services improves access, increases veterinarian income, and frees up clinics and urgent care hospitals to focus on cases that require hands-on treatment. The company also offers prescription delivery in some areas.

Hospitals are sending unprofitable outpatient primary care patients to independent, non-profit “Health Center Program Look-Alikes” that they create themselves, which are paid higher rates by Medicare and Medicaid, are eligible to buy discounted drugs under the 340B program, and can qualify newly hired doctors for federal help with student debt. KHN says that 108 look-alike health centers are in operation, sometimes on hospital campuses and sometimes staffed fully by hospital employees, to make it easy to divert non-urgent cases away from the ED. Lee Health says the program reduced unnecessary ED visits by 20%.

What We Learned from the Joe Dobson Inquest

6 Moves to Wake Up Glutes and Hamstrings

Children very vulnerable to severe injury from quad bike use

Researchers present their viewpoint on the link between EBV infections and the development of...