At the end of the day, we all have our vices. Some, like myself, drown out the world by watching borderline unhealthy amounts of TV. Others bury themselves in work. And one iconic queen finds comfort in Rolos.

Who is this mystery woman with such solid taste in sweets? It’s none other than Patricia, Jennifer Lewis’s character on I Love That for You, a new Showtime comedy from Vanessa Bayer and Jeremy Beiler.

For those who have yet to watch this delightful show, it follows Joanna Gold (Bayer) as she embarks on her childhood dream of working for a home shopping network. The shopping channel, SVN, is run by Patricia (Lewis), a business bitch with a hard exterior, sky high expectations, very little patience, and a random Rolo obsession.

We first learn about Patricia’s incredibly specific sweet tooth in the pilot when a fancy glass bowl loaded with Rolos is seen on her desk, but we quickly learn her office isn’t the only place where she decadently unwraps and savors the tiny treats. She has Rolo stashes scattered throughout her home, including a glass bowl on her bedside table, which she reaches for in the morning right after she smashes her alarm clock. That’s right, before she brushes her teeth and everything. The precious nightstand stash.
Credit: SCREENSHOT: I LOVE THAT FOR YOU / SHOWTIME

Whenever there’s cause for celebration or times are tough, Patricia pops a Rolo (or a dozen) for comfort. And that’s a quality in a TV character I never knew I desperately needed. Seeing a candy from the 1930s get its 15 minutes of fame in a 2022 comedy is hilariously unexpected, so I asked Beiler, I Love That for You‘s co-creator and executive producer, what inspired the show’s Rolo revival.

“We love this idea of going into a big scary meeting with a big scary person and you’re in this room where you don’t feel comfortable at all, but then there’s — and this is something we’ve all experienced in real life — there’s like a bowl of taffies or something. The idea that you’re supposed to be relaxed enough to go ahead and grab one is very fake, because it’s like, you can’t actually have one. You’re not actually relaxed in this environment ever,” Beiler explained over a Zoom call. “[It’s] something that has the appearance of, ‘This is for anyone, please help yourself.’ But then in Episode 2, you know Joanna reaches for one and Darcy [Patricia’s assistant] makes a face, and he’s like, ‘What the fuck are you doing?’ So that just always made us laugh.” When asked if there was ever another candy or comfort food being considered for Patricia, Beiler revealed the team did have one other idea. “I think initially they talked about salt water taffy because there’s also something funny about something that’s really chewy if you have one, and you have to do a lot of work with your mouth and your teeth. And in the context of being at work it’s very embarrassing to be eating a taffy. And they also kind of taste not great,” he said.

Though Beiler doesn’t remember exactly how the team landed on Rolos, I’m glad they did, and he attributes the idea to the show’s brilliant writers’ room.

“I don’t even remember how it became Rolos, but it was also a little bit of an instinctual thing, a little bit of like, shoot from the hip, not think too much about it. The mystery [of the Rolos] that’s kind of inspiring your question is actually part of what’s great about it. It’s part of what we followed about it. I don’t think I have all the answers for, ‘Why Rolos?’ But there was something that felt great about it,” he explained. “You have to unwrap them individually and they look kind of fancy because they’re golden — they’re like doubloons. And then we all have our vices. There’s also something funny about this like super powerful woman who has it all and it’s like this, you know, multimillionaire wanting something that just so sort of like run-of-the-mill.” You heard her.
Credit: SCREENSHOT: I LOVE THAT FOR YOU / SHOWTIME

As a bit of a “Rolo Head” myself, I know that until 2003, the candy’s longtime slogan was,” Do you love anyone enough to give them your last Rolo?” I shared this with Beiler and explained that what I’ve seen of Patricia in the first six ILTFY screeners, I’m not sure she deems anyone in her life worthy of her last Rolo just yet.

“That’s honestly brilliant what you just said. I was not aware that that was the slogan,” he laughed. “You’re quite right to wonder whether she has anybody that she would give her last Rolo to. We do picture her as this woman who’s chosen career over relationships in a lot of ways.”

While Patricia might not be ready to give up her last Rolo, we have seen her share her precious confections with Joanna on several occasions. 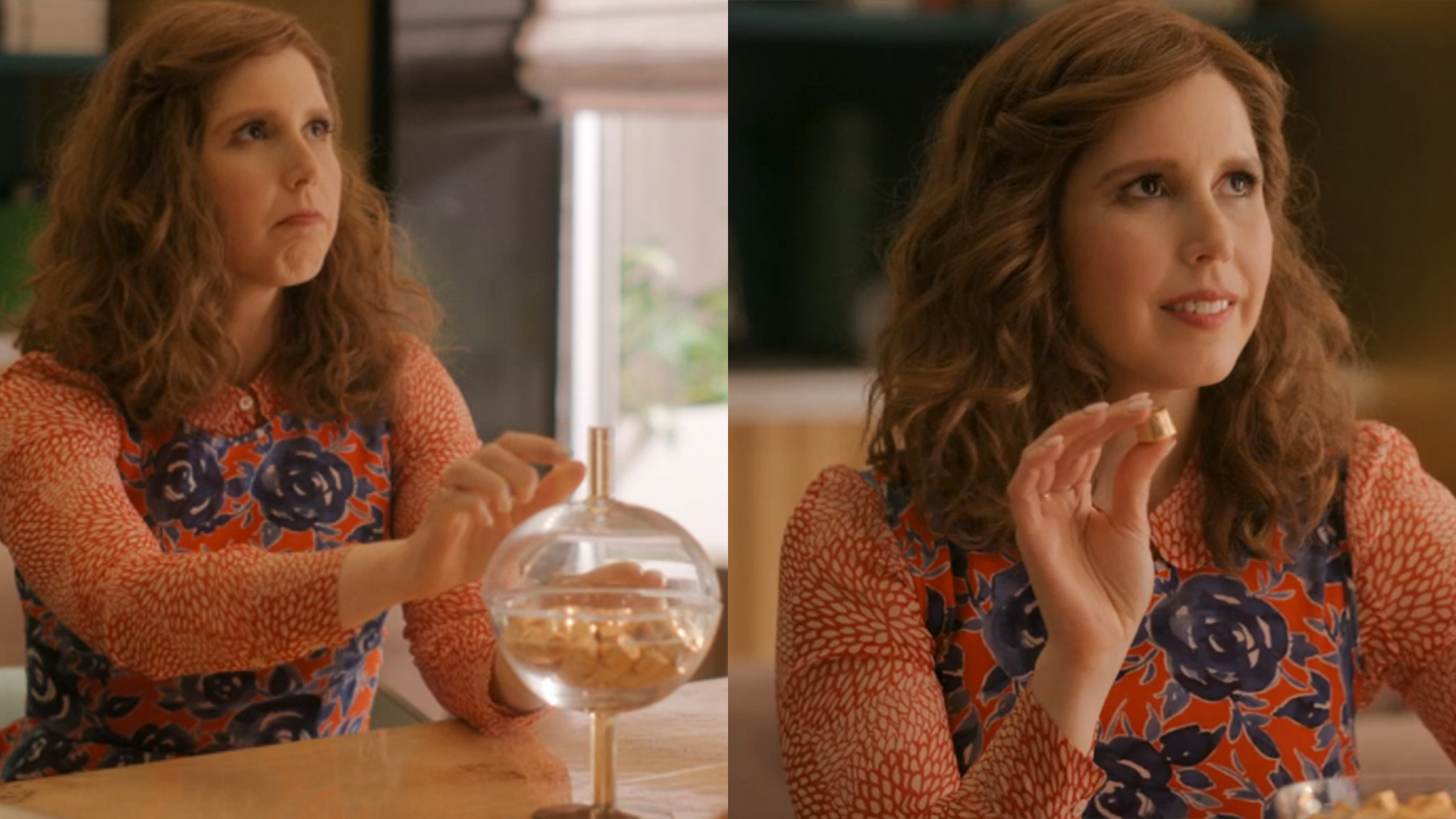 “What makes her want to share with Joanna versus anyone else?” Beiler mused. “Well, I think with Joanna she sees instantly an opportunity to make a lot of money. That’s the initial draw, and then a sort of deeper connection develops with Joanna. But initially, [Patricia’s] like ‘I’m gonna I want this person to be comfortable,’ and I think the offer of the Rolo is largely transactional. She’s like, ‘I’ll give you one of these gold doubloons, so I give you something that I value, that’s a big prize to me, as long as it keeps you on the hook and keeps you making me money.'”

Beiler, who at one point during our call said, “I’m glad you’re picking up on the Rolos, Nicole. It’s very satisfying for me to receive questions about the Rolos,” graciously indulged my unhinged perspective, and for that I am thankful. I’m as obsessed with Patricia’s Rolo obsession as she is with Rolos, and I hope you’ll all get on my level soon and give this ILTFY detail the praise it deserves.

The first four episodes of I Love That for You are now streaming on Showtime. New episodes air on Sundays.