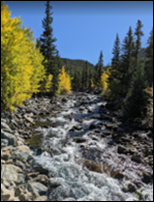 I spent some time in the wilderness this week, in an attempt to catch up on some sorely needed rest and relaxation. Unfortunately, changing time zones wasn’t terribly helpful on the rest piece, but there was definitely some relaxation and a lot of silliness as a group of adults tried to assemble a complicated Lego set while under the influence of cocktails. I had identified goals for this journey including completion of two specific hikes that I wasn’t able to manage on a previous trip. Although the first one was a success and helped me adjust to the altitude, the main event was a bust. I’m surprisingly OK with it and suppose I’ve reached the point in my life where the journey is equally as important as the destination, if not more. After my recent exposure to a patient injured while traveling, I’m also beyond grateful that the only problem I experienced was a close encounter between my favorite hiking pants and some tenacious tree sap.

It feels like everyone I know in the healthcare IT world is talking about the planned October 6 deadline for organizations to comply with the HHS information-sharing rule. Many care delivery organizations are relying on their EHR vendors to ensure compliance, which, depending on the vendor, has led to a flurry of last-minute upgrades. From what I hear around the virtual water cooler, vendor readiness has ranged from “competent” to “clueless,” with many vendors missing deadlines and others who are not communicating their status. This week, a group of high-profile stakeholders (including CHIME, the American Academy of Family Physicians, The American Hospital Association, and others) sent a plea to the Secretary of the US Department of Health and Human Services in an attempt to postpone the deadline. The letter asks for a one-year extension in addition to using warning communications before entities are subject to formal investigations or fines.

Reasons for a delay include: inability to support access to and exchange of electronic health information (EHI); lack of definition around EHI and confusion around the Office of the National Coordinator’s (ONC) EHI infographic; confusion on how exceptions can be applied when information cannot our should not be exchanged; concern around the protection of sensitive information such as drug use, mental health, and reproductive information; and lack of responsiveness to questions submitted to ONC. Specifically, from the patient perspective, the letter cites “the harm occurring when laboratory results and reports are released in instances of life threatening or life limiting diagnoses.” As someone who has been in that situation – which is hard to cope with even when you’re a practicing physician with medical knowledge and not just the average patient – I can support that concern completely. There will be harm, but it’s going to be impossible to quantify. If this effort were a research project, I can’t imagine the Institutional Review Board that would approve it.

Less exciting but also coming in October: it’s time for the annual updates to the ICD-10 database, effective October 1. Codes can be added, deleted, or revised. Incorrect coding can lead to payment delays or denials, so I hope everyone’s vendors and technology teams have this adequately covered. Some of the changes are certainly reflective of the times we’re living in, including: expansion of codes for various substance use disorders, indicating that the disorders are in remission; additional codes for reactions to severe stress; addition of codes for accidents related to electric bicycles; and three new codes for problems related to housing and economic circumstances. Other codes that caught my attention include six new codes for fractures related to cardiopulmonary resuscitation (CPR) and two additions for patient noncompliance with medical advice.

I was excited to see data released by Blue Cross NC addressing the increase in use of telehealth services. The company recently completed a two-year review of telehealth claims data. Based on recent trends, those covered by its policies will have access to 77 additional telehealth services effective January 1, 2023. Interesting data points: in 2020, the plan saw a 7,500% increase in telehealth claims; telehealth accounted for 47% of behavioral health visits and 10% of family medicine visits, but only 2% of specialist visits. The data is a little murky, though, because family medicine and pediatrics are listed separately from “primary care,” so I’m not sure what’s going on there, since both specialties are clearly considered primary care. I was amused by the fact that although the company’s spokesperson said the changes are “so members can access easy, affordable care no matter where they live,” the new policy specifically excludes members receiving care from out-of-state providers. Looks like vacationers might be incentivized to be less than truthful about their physical location in the name of better coverage.

Those who know that telehealth services won’t be covered by insurance might want to make sure they’re accessing care from a trusted site. One of my colleagues recently had a direct-to-consumer telehealth experience when they were trying to get relief from a rash that might have been related to insect bites but was instead told that they had been infected by flesh-eating bacteria. Although they requested a refund on the visit it was less than timely, and I’m pretty sure they’ll never use that vendor again.

Recently, I’ve been inundated with LinkedIn requests. Although some of them have been legitimate and likely triggered by networking at the recent Epic User Group meeting, others are entirely spammy. Word to the wise: I’m not going to accept your connection request if your profile doesn’t have a picture, only includes your first name, or if you’re asking me to buy something. Another pet peeve: those who prefix their names with “Dr.” without any credentials on their profile. I received a request today from someone I’ll anonymize as “Dr. Harley” and neither his first name nor his last name included “Harley.” Unless you’re a top-notch motorcycle mechanic, I’m not sure what you’re gaining by styling yourself this way.

Have you seen a burst of LinkedIn requests? Do you find them useful at all or just annoying? Leave a comment or email me.