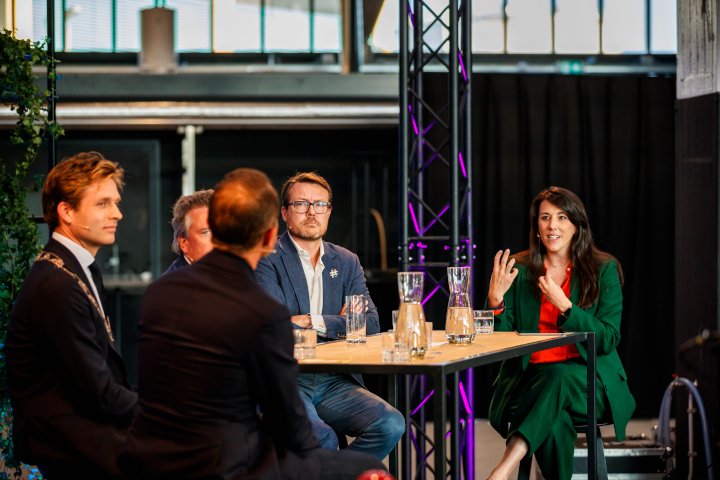 Already an established leader in the innovation and entrepreneurial realm when she joined CIC in 2014, Ablett-Jordaan has been instrumental to the company’s rise. During her tenure, she played a key role in establishing CIC’s Miami and Philadelphia innovation campuses, and launched its first international location in Rotterdam in 2015 — now home to more than 250 startups, scale-ups, and innovative clients. Most recently, she oversaw the launches of CIC’s Warsaw and Tokyo centers in 2020.

“I will never forget when Tim [Rowe] called me on Christmas Eve eight years ago, offering me the position to launch CIC Rotterdam. After two years, we opened the center and the next opportunity was to move there to run it. I quickly moved from Boston to the Netherlands, eager to build a successful team, and never looked back,” said Ablett-Jordaan. “I am so excited to serve as COO and be instrumental in this company’s growing story. As CIC looks to the future, and the world continues to acclimate to today’s highly flexible ways of working, our model is pioneering and ahead of the curve in solving the future of work.”

Ablett-Jordaan is a respected public face and influential voice in the world’s startup community. Activities like speaking to Dutch parliament alongside the Netherlands Prince Constantijn to advocate for better startup policy, and interviewing Rotterdam Mayor Ahmed Aboutaleb for SXSW online 2021 have become second nature to her. She played a key role in broadening the global network of Venture Café — CIC’s primary programming partner — and, for the past two years, has moderated South Holland’s startup and tech Upstream Festival. Ablett-Jordaan has personally mentored startups through programs like TechStars Amsterdam and TU Delft’s Yes!Delft. She volunteers on the boards of organizations like the American Chamber of Commerce in Rotterdam, and, previously, Restart Network, a Rotterdam nonprofit providing coding education and employment opportunities to refugees.

“Everyone who has had the pleasure of working with Melissa has experienced excellence in every aspect of her work. She is a thoughtful leader with clear-sighted business judgment as well as a good and loyal friend whom her coworkers care for deeply,” said Rowe. “Her work setting up CIC Rotterdam, particularly the systems and processes to support that first international expansion, laid a foundation for our expansion into other cities around the globe. Melissa always strives for the best and is dedicated to making our company the predominant global platform for growth for the world’s innovators.”

Food Allergy is Associated with Lower Risk of COVID-19 Infection

“It has been extremely rewarding and inspiring to work for a mission-driven company like CIC, which supports innovators in solving the world’s most pressing challenges, and simultaneously positions innovation to fuel economic development,” said Ablett-Jordaan. “During my time here, I’ve witnessed clients combat climate change, advance science, and invent dynamic solutions to real-world problems, all the while sharing one commonality — that CIC is home.”

Prior to joining CIC, Ablett-Jordaan worked for the Commonwealth of Massachusetts’ leading innovation policy agency, the Mass Tech Collaborative’s John Adams Institute, where she developed public-private initiatives to stimulate the State’s tech sector and support entrepreneurship. Following that, she joined StreetWise Media, a digital media startup focused on local news and events for entrepreneurs and the innovation community. For two years, she helped lead “BostInno,” the company’s flagship Boston outlet, as general manager and supported its expansion into three cities. In 2012, the company was acquired by the American City Business Journals, a part of the Conde Nast and Advance Publications family.

Ablett-Jordaan graduated with honors from the University of Wisconsin-Madison and lives in Rotterdam, the Netherlands. She is passionate about championing gender equality in the workplace and revels in learning about and working with different cultures, and building high-performing teams. As if all her accomplishments and talents weren’t already impressive enough, she also plays classical piano in her free time.

Ironless winding: Improving the comfort and mobility of prosthetics