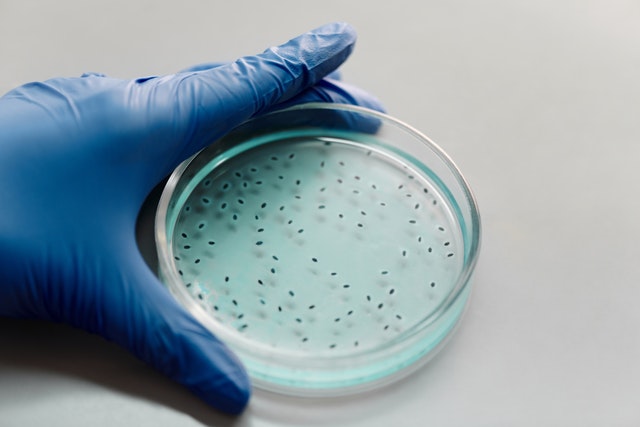 A new study investigates the potential antimicrobial benefits of a phytochemical.

Despite their benefit, antibiotics are not foolproof, and pathogenic bacteria that are not killed from an antibiotic treatment can reproduce and adapt to be resistant against that antibiotic.  These pathogens are referred to as antibiotic resistant bacteria, and they are generally more difficult to treat than the previous bacteria.2  Antibiotic resistance ultimately poses a threat to patients because it may limit the effectiveness of a treatment, and this can lead to a variety of issues in the future.2,3

One mechanism that can further the effects of this antibiotic resistance is the formation of biofilms, where bacteria group together to form communities.4  These bacteria essentially work together to create a defense shield against antibiotics, external stressors, and the host’s immune system.4,5  Understanding how to disrupt the formation of these biofilms is particularly important for wound healing protocols, since biofilms are sometimes present in chronic, non-healing wounds.7  This could also lead to new discoveries in reducing the global issue of antibiotic resistance.

Phytochemicals, or natural compounds found in plants, are common areas of research in drug development, and it is unknown whether some of these phytochemicals could help disrupt biofilm formation.  3,3’-diindolylmethane (DIM), is a phytochemical that comes from cruciferous vegetables such as broccoli and cabbage, and is thought to have anti-inflammatory and antimicrobial activity.3,6  To determine whether this phytochemical can prevent the formation of biofilms, a study was conducted and published in Pharmaceutics.3

First, researchers wanted to establish the effects of DIM on biofilm growth of four different bacterial cultures in vitro: A. baumannii, S. marcenscens, P. stuartii, and P. aeruginosa.  This was done by comparing the levels of biofilm growth in bacterial cultures with DIM and without DIM.3  Visual representations of the biofilms were also obtained using a special microscope, and this helped determine their structure and thickness.  Finally, production of extracellular polymeric substances (EPS), which is an important component of biofilm and is directly related to the amount of biofilm production, was measured using an assay.3,8

Dogs Get Healthier When People Get Fitter

Finally, researchers measured the effects of DIM on biofilm formation in wound healing.  This was done by using a cream containing either DIM or an inactive control on pig (porcine) wounds inoculated with P. aeruginosa bacteria, which is commonly associated with biofilm formation in wounds.3,10  After ten days, samples of wound tissue were analyzed for bacterial activity.

The bacterial cultures treated with DIM in the first part in the study had 62%, 82%, 86%, and 76% thinner biofilms than those without DIM for A. baumannii, S. marcenscens, P. stuartii, and P. aeruginosa, respectively.3  This was reflected in both in-vitro measures as well as the visual representations.

Next, MIC values in many of the antibiotics were lower when treated with DIM than without.  The difference between the MIC values was particularly significant with tobramycin, as MIC values were 50% lower in the DIM-treated sample.3  This may be associated with greater antibiotic efficiency with DIM; however, more research is needed.  Finally, the porcine wounds treated with DIM visually healed better, and they also had, on average, a three-fold decrease in bacterial counts of P. aeruginosa.3

The results of this study suggest that treatment with DIM was associated with decreased biofilm production in the four bacterial cultures.  Additionally, in the porcine wounds, treatment with DIM was associated with improved healing and decreased bacterial counts.  More research is needed to confirm this as well as determine whether these findings would still apply to a larger sample.  More research is also needed to further investigate the potential benefits of this phytochemical.

Top 4 Hottest Trends of the Moment